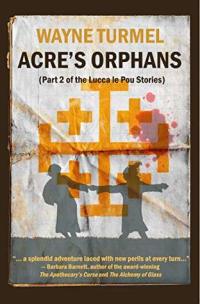 This is the second novel featuring protagonist Lucca le Pou (Lucca the Louse), but it can easily function as a standalone novel. It opens very shortly after the Battle of Hattin in which Salah-adin’s forces defeated the Crusaders and forced them to surrender vast portions including Jerusalem, and executing many Knights Hospitallers. Lucca, one of the titular orphans of Acre, has lived his entire life in Acre and has little desire to leave the city when Salah-adin takes control. However, his nominal guardians at the leper house where he lives convince him to go to Tyre, taking along Sister Marie-Pilar, a leprous nun, and Niheda, another orphan girl who attached herself to Lucca. Lucca is determined to go to Tyre to find Count Raymond, whose name is being slandered in Acre and accused of being a traitor, setting him up to be murdered. Lucca is to find the Count and deliver a message to him from his allies still in Acre, avoid being captured by Salah-adin’s forces, keep Sister and Nahida safe, and somehow return home again in one piece.

At first, I thought this was a YA or even a children’s book because of the young age of the protagonist. However, the more I read, the more obvious it became that this is not a children’s book. It is a nicely written adult novel, replete with rich historical detail, which just happens to have a 10-year-old protagonist. The themes the book covers are not ones most children would want to read, and the violence, disease, and general human misery on display would make it unsuitable for many younger readers.

Despite the somber topics the book covers – the Crusades, leprosy, children surviving horrors on their own – Turmel does a really excellent job of keeping it appropriately light. The bits of humor that shine through in Lucca’s personality lift what could otherwise be a very grim read and instead bring in genuine laughter and a sense of adventure rather than doom.

The cast of characters is pleasingly diverse. I appreciated that the bad guys were not automatically the Muslim characters. There is enough Othering that occurs in both literature and real life as it is, so to see a book that includes a wide range of people as main characters and which doesn’t automatically pigeonhole those characters into revolting stereotypical roles is a really nice change of pace. This seems particularly true of novels set during the Crusades; one website that has the biggest list of historical novels I’ve ever encountered still only has about 15 books on the Crusades as told from the Muslim point of view, and not all of those are even written by Muslim authors. This book still doesn’t tick all the boxes for me in that regard, but I’m hard to please, and it is nevertheless a delightfully well-rounded story.

Lucca is a boy I wouldn’t mind knowing in real life. I would want to bring him home and feed him up and throw him in the tub because he needs a mother to look after him. Nahida is a girl I want to hold and protect from the world, same as with my own daughter, and keep them all safe. The giant Knight Hospitaller Gerhardt reminds me of a dear friend of mine and Sister Marie-Pilar is the fierce and protective auntie or grandmother everyone should have. These characters breath life from every page and made me care about what happened to them.

One thought on “Acre’s Orphans”