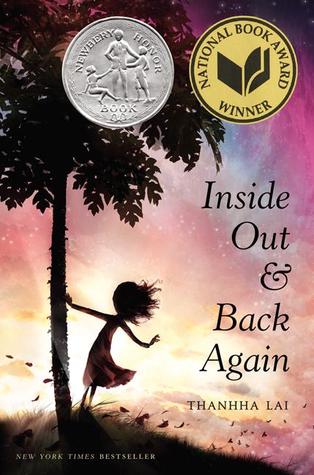 nside Out and Back Again by Thanhha Lai

This novel is the story of Ha, who flees Vietnam with her mother and brothers to escape the war. They end up in Alabama where they are hosted by a family that Ha thinks is a family of cowboys. The story tells of her challenges in adapting to life in 1970s America.

The story is written in verse and makes for a very lyrical novel. The way Lai uses imagery in her poems makes the emotions Ha and her family are feeling visceral. They are afraid to leave their home, they worry that they don’t have news about Ha’s father or where he might be, and they feel like they are abandoning him and their culture to leave and set up a new life for themselves in America. When they get there, Ha’s fears are justified because she cannot speak English, people think she is dumb because of it, and the people in general are close-minded and unwilling to accept them as part of their community. It was a bittersweet story and a very good one to use to discuss the experiences of refugees with your children.

(I refuse to put a pic of this book cover here. I don’t want to see its ugly face)

Too Much and Never Enough by Mary L. Trump

Mary Trump is Donald Trump’s niece, if anyone at all has been under a rock and didn’t learn that by now. She has a PhD in psychology and uses it to explain the excrescence that is her uncle, by diabolical fate the President of the United States.

While this book really didn’t give any new information to those of us who have been paying attention, it is still nice to have our suspicions about the mango Mussolini confirmed by a member of the family who is an expert in the field. However, she seems to place all the blame squarely on the shoulders of his parents, in particular his dad. Yes, I am sure their horrible parenting impacted how he grew up. But doing so also takes the blame off of him – AGAIN – and makes it so he is not responsible for his actions. There are plenty of kids who had awful childhoods, far worse than Donny’s gilded negligence, and those people didn’t turn into malignant narcissists. So fuck that. He had a shitty childhood but he is the one who chooses cruelty over compassion and is a loathsome creature.

Also, if I had a family like that, I would drop them so fucking fast you’d think I discovered warp drive. The fact that she hasn’t done so kind of seems to me like she’s sticking around in hopes of getting some money after all. That, or a scorching case of Stockholm Syndrome. Or both. #armchairpsychiatry. Whatever the case is, it rings hollow in a lot of ways.

One thought on “Lightning Round: Inside Out and Back Again and Too Much and Never Enough”