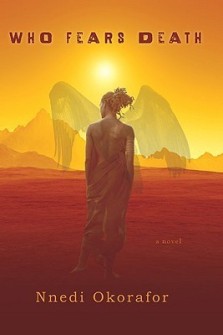 In a future post-apocalyptic Sudan, genocide between different tribes still occurs. When a woman is raped by the military leader of another tribe, she wanders into the desert, hoping to die. When she discovers she is pregnant, she lives in the desert for years and raises her daughter to be strong and fierce. They eventually move into a town so the girl, Onyesonwu, can attend school. There, Onye learns that she has strange and frightening abilities, able to turn herself into animals or travel a spirit realm. Convincing the town’s shaman to train her, Onye soon learns that a powerful sorcerer is trying to kill her in order to prevent a prophecy from coming true, a prophecy that says Onye is the person who will change the fabric of her society.

There is so much to unpack in this novel. On the surface, it can be read just as a fantasy/ post-apocalyptic story. But if you pay attention, you can see the seamless manner in which traditional legends, stories, and customs are woven in with technology like computers, capture stations, and GPS. The blending of the traditional and the technological is, I think, a commentary on contemporary Africa. I have never been to any country in Africa, but I know several people who have and from what they say, it seems reflective of various societies. I wonder if the connection to the traditional is simply too strong to abandon, despite the advances in technology available. 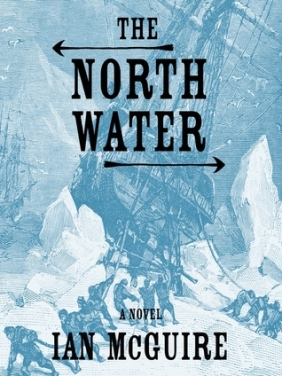 The North Water by Ian McGuire

Her Grace’s rating:  out of 5 stars

In the 19th century, whaling ships often set out to the Arctic to bring back whale blubber and the furs of polar bears and seals. Henry Drax is a harpooner aboard the Volunteer, and Patrick Sumner is shipping out as the ship’s medic. Drax is a sick twist and Sumner is a disgraced army surgeon. When Sumner discovers that a cabin boy is being violently raped, and then later discovers the child murdered in the hold, it sets the two men on a collision course during this cursed voyage.

OK, so I know this was longlisted for the Booker in 2016. Neat. And yes, it absolutely had some beautiful writing, particularly when describing the scenery. But holy shit, y’all. This novel was chock full of unrelenting, vicious, gory violence. I am not a squeamish reader by any means, but the abuse and murder of children and cavalier slaughtering of animals, complete with many fully descriptive scenes, is more than I could handle this time.

I KNOW the depictions of violence and casual disregard for animal life was historically accurate, but Jesus fucking Christ. I think the author was getting off on it or something. For example, the scene where the whalers killed a mother polar bear and captured her cub was horrific. Or this gem:

Jones nods, takes a fresh blubber spade from the malemauk boat, waits for one of the sharks to come close enough, and then stabs at it, opening up a foot-long gash in its side. A loose-knit garland of entrails, pink, red, and purple, slurps immediately from the wound. The injured shark thrashes for a moment, then bends backwards and starts urgently gobbling its own insides.

And the joyful clubbing of baby seals. Or the near-orgasmic descriptions of whales blowing gobs of blood out their blowholes before they die, to the thrill of the men watching. And the multitude of excrement, both human and animal, or the vulgarity of the language (and believe me, I love a good fucking swear word). Is this really necessary? Again, I know this is the way it was back then, but there are ways to write that and still not be so enthralled with the violence. The gore and violence literally detracted and distracted from the plot.

I read this as an audiobook and found myself gradually increasing the reading speed just to get it over with. The narrator did a fabulous job of it, though. Five stars to his performance.

I once read the term ‘dicklit,’ and if ever there was a book to describe that, it is this one. Waiting to see how many men gather to explain why I’m wrong.

What can I say? Who doesn’t love learning about astronauts, even if it’s in a behind the scenes kind of way? It’s awesome to think that the processor in my phone is more powerful than the computer that landed men on the moon. Learning about the trials and tribulations the first men in space faced is fascinating. It’s too bad this book doesn’t discuss anything of the sort. END_OF_DOCUMENT_TOKEN_TO_BE_REPLACED

So, a cool thing happened this weekend with my book club meeting. A few months ago, while reading Sharon Kay Penman’s blog, she put up one of her infamous Book Bankruptcy Blogs. In it, I noticed a name I recognized – Judith Starkston, who was publishing a book called Hand of Fire.

“I bet Google will know!” replied the rest of my brain. It can have some good ideas on occasion. So off we went to ask Google and lo, and behold! We were rewarded with a link! To a website! We clicked it! END_OF_DOCUMENT_TOKEN_TO_BE_REPLACED

Some fun brain candy. A ramshackle old mansion in a posh area of London. A long lost inheritor. And cults! Who is telling the truth?
Warriors and Otherworld and Crow Folk, oh my!
Juliet Marillier is one of my very favorite authors. I have universally loved every one of her books. I can't even say that about Neil Gaiman, who I adore beyond all reason!
A sci-fi classic that I somehow missed years ago. Basically, The Canterbury Tales in space. Recommended with minor caveats. I do plan to read the rest of the series. Full review can be found on my blog (link in bio).