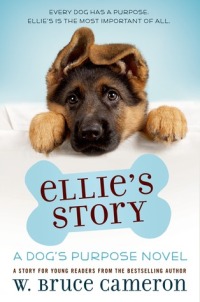 My daughter and I read books together at bedtime, and we take turns picking which book to read. Last time, I chose The Hobbit; this was the one she chose to read. It is a cute story for little kids about a search and rescue dog named, surprisingly, Ellie. The narrative takes us from the time she’s a pup with her littermates to her first trainer, Jakob, learning how to do her job, and on to her second and presumably final trainer, Maya. Jakob teaches Ellie how to be a search and rescue dog, what it means to Work, and Find, and Show in relation to lost people. When Jakob is shot in the line of duty and retires, Maya takes Ellie and becomes her new partner. They work together for many years until an injury forces the police department to retire Ellie herself. Rather than not having any job for her dog to do, Maya convinces the PD to let her use Ellie as an outreach program dog, teaching the community about the important work search and rescue dogs do every day.

My daughter ate this book up. It took a while to get through it since we only read it together at night before bed, but it was sufficient to keep her engaged. It is definitely written for much younger or less skilled readers; I mostly found the stories of the rescues to be repetitive and a little boring after a while, but the basic story was good, and since it is for children, that’s just fine.

One thing I particularly liked was that there was room for discussion with my daughter about some of the bad things that can happen. When Ellie and Maya went to the site of an earthquake to search for people, there were a lot of casualties. It was not a gory or very upsetting scene, likely because the narrator is Ellie herself and she didn’t quite understand that the people she found were dead. She only thought they smelled odd and they weren’t happy to be found like normal, so that was upsetting to her. But I thought it was important to include a scenario in which not everyone was found, or wasn’t found alive. That’s real life and I think it’s important not to shelter children from that. We talked about that a little bit so that she could understand that sometimes bad things happen, but I also took that opportunity to remind her about Mr Rogers and the helpers.

Something I think was not at all well done was the way body image was addressed with regard to Maya. It is written in a way that makes her sound inadequate compared to her male counterparts who are also out of shape. She is described as being unable to keep up with Ellie or with other officers out in the field, huffing and puffing and often in pain, whereas the men are rarely described as such. It was particularly gross when her mother told her now that she got certified to be Ellie’s handler, she needs to eat, making it sound as though she was starving herself to lose weight. Not a good message to send to young children. The only good thing about it at all was showing how hard Maya worked to get in shape, but even that has some drawbacks in that it highlights how her body was somehow imperfect or not up to par the way it was. It was obviously good enough to be a patrol officer, so she can’t have been too terribly out of shape to begin with given that there are physical fitness requirements for that position, but it made her sound like she belonged on My 600-Pound Life or something. This could have been handled better.

Overall, Ellie’s Story was a cute book to read together with my kid, and it offered some decent material for discussion with her. She had read it before on her own, which is fine, though I am glad I could read it with her so we could talk about some of the things I felt were important to address.

Recently, my daughter needed to cull her books, because, at five years old, she is a very good reader and has long outgrown many of the board books and younger story books that cluttered her bookshelves. So together, we sat down and went through them, using it as a wonderful opportunity to teach about giving to others because not everyone is as fortunate as we are to have a small home library of their own, and that some other child might really love getting her board book versions of Jane Eyre and Dracula or the 48 point font version of Pixar’s Brave. She had long since mastered those. Then we came across a book that she hadn’t read in ages, but could technically have kept but decided she wanted to get a new book instead, so she opted to part with it in return for a new one. It was The Poky Little Puppy. Before it went into the pile for Goodwill, she wanted to read it again one last time because she loves puppies. Fair enough. We settled onto the couch for a reading.

I remembered then why I never read that book to her. END_OF_DOCUMENT_TOKEN_TO_BE_REPLACED

Seriously. What the fuck is it?
Girl's art class project today. ❤️