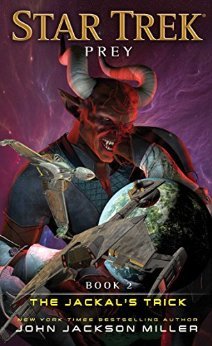 The second installment in JJM’s Klingon trilogy. The action picked up right where it left off in the previous book. Korgh has taken control of the ancient House of Kruge and, in rather Trump like fashion, is now taking every opportunity to attack the longtime allies of the Klingon Empire and weaken its ties to the Federation. Someone claiming to actually BE Kruge is whipping the Unsung into a froth of rage against traditional Klingons who haven’t been discommendated. And it’s all linked to an old Enterprise foe from nearly 20 years ago who was never what she appeared to be.

This was a fun and action packed novel. I could read it just on its surface but, rather unlike the first in this Klingon trilogy, it seemed a bit deeper, dealing much more closely with complex themes of honor and duty. Worf really gets put through the wringer in this one and he’s not done yet. I have hopes for a thing to happen with him in the final novel in the trilogy that began in this novel. A good thing about being so far behind on my Trek reading is that I don’t have to wait for the next one to come out to find out if I’m right! A thoroughly enjoyable read! ‘Qapla!

One random thing – that cover. Who the fuck is the Klingon demon supposed to be on the front, and why is he apparently punching himself in the face? It doesn’t fit in with the story, other but than one small and fairly irrelevant scene with Geordi and Tuvok, and doesn’t matter much to the overarching plot. That’s just the weirdest cover image I’ve seen in a while.