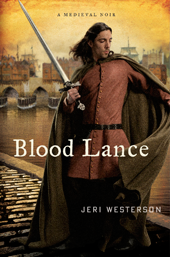 In this installment, Crispin begins by narrowly avoiding a fine for roughing up some gents of the Watch because he heroically dives into the Thames after a man who fell in. Too bad for the man he was murdered. Now Crispin, along with trusty sidekick Jack Tucker, are embroiled in the search for the man’s murderer, who may or may not have been betrothed to the vixen Crispin can’t stop thinking about, and a quest to save an old friend’s honor. Oh, and the way to solve all the mysteries is to find a relic which might be the spear that allegedly poked Jesus in the side during the crucifixion.

I was fascinated by the thought of knights suffering from PTSD. But why not? Just because they weren’t dealing with chemical gases and trench warfare as they in WWI, or as aerial dogfights and bombings and The Holocaust like in WWII doesn’t mean they didn’t still have to deal with siege conditions, starvation, terror, disease, pain, s seeing friends die screaming, etc. In many ways, I think war in the Middle Ages would have caused more instances of PTSD, or at least unique brands of it, for it must have been a very personal thing to have to look someone in the eye as you kill them. To know that you had to do that to survive, and to see the aftermath of it…I can easily understand why knights would have suffered PTSD, even if they wouldn’t have understood it.

Altogether, another excellent entry and I highly recommend it to all and sundry!