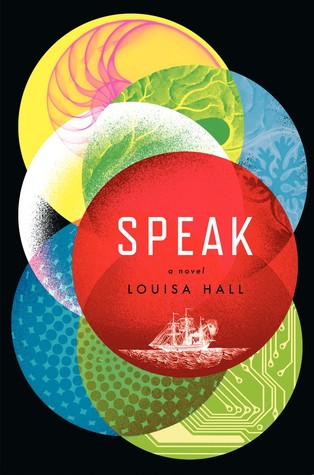 Speak by Louisa Hall was a complex, layered story about Artificial Intelligence, told from multiple points of view that spanned from the 1660s to the 2040s. I found it to be challenging in its discussion of subjects involving AI, such as “what makes something alive?” or “what are the ethics of creating this kind of life vs a machine?” or “can a machine truly be alive if it is only programmed with responses to various input?” It was fascinating.

All the voices in the book were woven together beautifully: Mary Bradford, the young English girl whose journal became the “voice” of the babybots; Alan Turing, the famous mathematician who broke the Enigma Code and basically won WWII; Karl Dett, the programmer who created a computer who could learn and then advocated strongly against his own creations; Stephen Chinn, the programmer who invented the babybot, writing his memoirs from prison; a host of more minor characters, smaller but vitally important; and through it all, the babybots who cannot understand why they were taken from their children. Their voices all speak, and are necessary to the story, and without one, a piece would be missing.

It was really a heartbreaking story, and dealt with a lot of complex issues. Highly recommended.