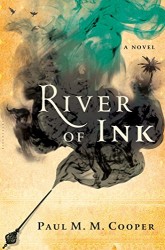 This debut novel, set in 13th-century Sri Lanka, is the story of court poet Asanka. When his king is usurped by a tyrant from the mainland, he is commissioned by the new king to translate a holy Sanskrit text into the local Tamil language. Asanka at first makes some minor mistakes in translation, which then become deliberate and subversive alterations to the text. Through his work, Asanka becomes the reluctant catalyst for rebellion.

Cooper’s novel is written in gorgeous, lyrical first person as a one-sided narrative directed to Asanka’s mistress, Sarasi. Through Asanka’s eyes, readers see the changing political climate he struggles through, his role as a figurehead of insurrection, and his overarching desire to be reunited with Sarasi. Woven wonderfully throughout the novel is the theme of the change poetry can create, a stark counterpoint to Asanka’s own claim that “poetry makes nothing happen.” This novel is highly recommended for its lush imagery, unique narrative format, and strong theme of human creativity and endurance.