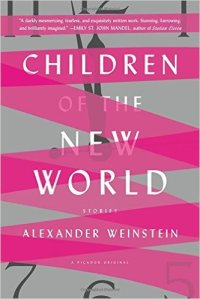 Wow. This collection of speculative fiction short stories by Alexander Weinstein is set in the near-future and deals with all manner of issues that make me think. It is dark, sad, funny, and feels very eerily prescient in many ways.

The first story, “Saying Goodbye to Yang,” reminded me a lot of the various Star Trek episodes that dealt with the issue of free will, personal rights, and the sentience of androids and other artificial life forms. It made me sad that the family never really thought of Yang as part of their family, not really, until he was gone. Did Yang know that? Did it hurt his feelings? Did he ever think about leaving to make his own life but couldn’t because he didn’t have the legal standing to do so? I am glad his family came to realize just how big a part of their life he was, and that he was his own unique person even if he was an android. Data was an android and I cried just as hard when he died as I did when Wash died on Serenity. Androids are people, too!

“The Cartographers” is the second story, and I think my second favorite in the collection. It deals with a man who works for a company that sells invented memories. Can’t afford to travel? No problem! For $99 you can beam a memory of a perfect family vacation to the Bahamas directly into your brain! Sounds pretty good, until you get to the edge, where the memory runs out and you find the white light. Or until you start beaming so many invented memories in that you lose the ability to distinguish reality from invention. Then you’re pretty fucked.

The titular story, “Children of the New World,” show readers an older couple who are new to their world of being logged in all the time. In their virtual world, they have everything they never did in their real life, including children. But what happens when the virtual world gets infected with a virus? This one was my favorite of the collection. It gave me all the feels. I don’t want to say more about it because I want everyone just to go read it themselves.

The entire collection is so well-crafted, so thought-provoking, and so close to home that it is unnerving. I thoroughly loved this even while it made me uncomfortable and anxious.