Since March is Women’s History Month and Star Trek is my favoritest ever, I thought it would be excellent to combine the two things. I know, I’m a genius! But honestly, there are some badass women in Star Trek. I want to take a few days over the course of the month to look at a few of them closer. 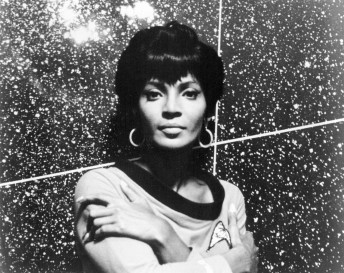 From day one, Star Trek has been pretty progressive in terms of women’s inclusivity. Nichelle Nichols was not only a black woman in a 1960s prime-time show, she portrayed a command officer. Uhura could give orders to a very great number of men on the Enterprise. She was instrumental in the visibility and empowerment of black women and other women of color in film and TV, and she had a very notable influence on the young Whoopi Goldberg.

Perhaps it is cliche of me, or disingenuous, to start with such an obvious choice from the Trekverse. But come on. Given the prominent role both Uhura and Nichelle had, the struggles all women today still face – for equality, the right to control our own bodies, the right not to be slut-shamed or victim-blamed for being raped, and so on and on and on. No one would dare do that to Uhura, and if they tried, I have a strong suspicion that he would find himself wearing his testicles as earrings, if he was even lucky enough to retain possession of them. So yes, I think it is perfect to start with Uhura. Nichelle has been a lifelong advocate for space exploration and equality, and was even employed by NASA from the late 1970s to the late 1980s to help recruit more women and minorities to the space program. Among her recruits were Sally RIde, the first American astronaut; Guion Bluford, the first black American astronaut; and Judith Resnick, who died on Challenger (space.com). Her spirit of fairness and exploration fit in wonderfully with many of the ideals of Star Trek.

Some of my favorite Uhura moments:

Other female comm officers I’m giving a shout-out to today include: