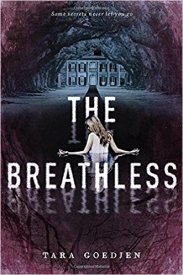 The Breathless by Tara Goedjen

I read it as an: hardcopy

So, I was hoping for super creepy, atmospheric Southern Gothic, maybe a YA version of Midnight in the Garden of Good and Evil. But this wasn’t remotely creepy. To be fair, I tend not to read a lot of YA – I find most of it simply too young (i.e., too immature, because I’m a grown woman with bills to pay and children to tend and I have little time for fictional teenage love triangles) – and I do read a lot of true crime and things that are actually scary. So I could be jaded. But this just wasn’t scary or creepy to me at all.

The writing style was rather off-putting as well, bouncing around between tenses and the changing perspective – the frequent use of you and we was just weird to me. Who is narrating? I thought at first it was pre-editing typos and such, but the copy I received appears to be a finished edition, not an ARC. However, the author does have some excellent descriptive writing of her scenery and it could be atmospheric and creepy if done in a different way. It’s like she was trying too hard and it just fell flat.

The racism that was laced throughout the novel is gross but should be taken with a grain of salt. I am not sure if it was because of the setting – it IS in the Deep South and there ARE parts set in antebellum South – or if it is because racism is still rampant in the country today and it was intended as some kind of social commentary. But, like, what diversity? Most of the characters were white. We have a more diverse society than that. I want my literature to reflect that.

Overall, I didn’t loathe this book, but I definitely didn’t love it. It just had too many unanswered questions, plot holes, unsympathetic characters, and just wasn’t my cuppa.

I received this book from Blogging for Books for this review.