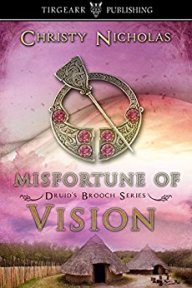 Thoughts: In 12th century Ireland, the old ways of Druidism and prophecy are coming into conflict with the new ways of Christianity. Orlagh has been the Royal Seer to her chieftain for over 40 years. Recently, though, the chieftain has been disregarding Orlagh’s visions, to the detriment of the tribe. While Orlagh honors the old ways and the Fey Folk, she walks a fine line and knows that she must balance her gift of prophecy against the teachings of the new church, and tries to give proper credit to the new Christian god for her abilities. She knows, though, that her long life is soon to end, and since she is the only living member of her family left, she must find a worthy heir to whom she can pass on her family brooch, a faerie brooch that gives its owner magical abilities. In exchange for knowledge needed to fulfill her mission, Orlagh makes a deal with a faerie Lord. At the same time, her long-lost grandson, Declan, turns up, having traveled from town to town after the death of his parents. Declan is plagued by bad luck, mostly brought on by his poor decision-making skills and laziness, but his new sweetheart has given him a reinvigorated outlook on life and he is determined to make himself into a man worthy of her. When Declan and Orlagh reunite, will he be able to live up to everyone’s expectations, or will he revert to his past tendencies? And what of Orlagh’s agreement with the faerie Lord? For, as everyone knows, one does not lightly enter into a contract with the Fey…

Christy Nicholas has done it again with another vibrant, fast-paced, gripping tale. The tensions between the folk who incorporate the older ways into their daily habits and the priests of the Christian church are strong throughout. The cast of characters is complex and well drawn. I enjoyed Orlagh a great deal. She reminded me in many ways of my grandmother. I also tremendously appreciated reading a story where the protagonist was a woman older than 60. That’s not something readers get to see a whole lot of and it’s a shame, really. Older characters have a great deal to offer, so it is nice to see an older main character who is honored and respected. I hated Declan, as I think we were supposed to. Maybe he was supposed to instill some sympathy since we probably all know someone who can’t get out of their own way and keep making the same stupid mistakes, but I lack sympathy for people who can’t learn from their mistakes or who bring bad things upon themselves because they’re too lazy to work. I loved Cu-Ulaidh and absolutely adored the way he doted on Orlagh. I feel that Clodagh, Orlagh’s ward, could have been developed more, as well as her back story, but overall, this was a delightful read.

You can also read this review on DDRevs: https://discoveringdiamonds.blogspot.com/

2 thoughts on “Misfortune of Vision”