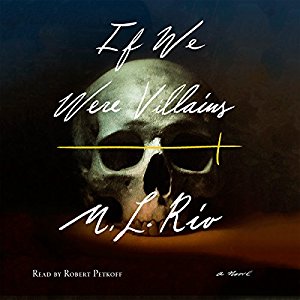 If We Were Villains by M.L. Rio

I loved this book so much I went out and bought my own copy of it, even though this is supposed to be my year of not buying anything. This was a tale of madness and obsession and ALL the Shakespeare! A group of theatre students at a prestigious college, nearing graduation, are coming unraveled and their places in their group are not as secure as they once thought. Tensions come to a head when they receive their role assignments for a major play in the fall and not all goes as they expect. Soon after, one of their troupe ends up dead and the others know more than they are willing to admit. Someone has to take the fall for what turns out to be a killing rather than an accidental death, and the resolution does indeed “make mad the guilty, and appall the free.”

There was almost nothing I didn’t love about this book. The characters were well developed and complex. They all had flaws and some were just downright nasty. Some were confusing – I do NOT understand Oliver’s motivations at all, nor why certain others remained silent. I loved all the Shakespearean quotes scattered throughout the text. I also loved the behind the scenes views of how Shakespearean actors learn how to BE Shakespearean actors. I know, for example, that they don’t actually hit each other on stage, but I never really thought about just how much choreography and practice it takes to make a slap look real, or how to do a punch differently than a slap and make that look real as well. Practicing with swords and foils and and voice coaches to learn difference of accent and dialects, all these things are just part of it. Then there is the history and social commentary woven into each play. It was a flashback to some of my better literature classes from my undergrad years. I loved it!

I listened to this as an audiobook, so it was really enriched because Robert Petkoff, the narrator, is a Shakespearean actor himself. He nailed the voice of every character in the book, giving each person richness and depth. There literally couldn’t have been a better narrator for this story short of someone like Sir Patrick Stewart, Mark Rylance, or Dame Judi Dench reading it to me. Petkoff did a superb job and I look forward to listening to more of his narration. To my delight, several of the books he reads are Star Trek, so a delightful bonus for me!

The only thing I didn’t absolutely love was sometimes I felt it got a little too long when the characters were acting the plays within the narrative of the novel. There was a lot of direct quoting from the plays themselves. Just, maybe, sum up. We’ve all read those, we don’t need a whole act copied out again. But then again, it was fun to see how these characters interpreted the plays, what differences they made to a scene that maybe I had seen some other actor do differently or might have done otherwise myself if I were an actor. The way they interact on the stage is a central component to the book. So maybe these scenes, replete with long passages of the Bard’s own words, aren’t as drawn out and long as initially thought. They are also a loving homage to the man himself. Throughout, the tension and the action and setting were all brilliant and I adored the final twist in the last lines. I simply can’t wait to read more by this very talented young author.