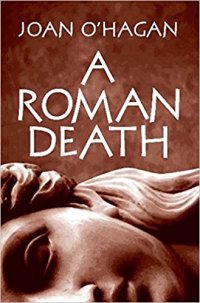 A Roman Death by Joan O’Hagan

In Joan O’Hagan’s novel A Roman Death, set just prior to Julius Caesar’s assassination, two families become embroiled in a feud that has the potential to bring both to ruin. The young daughter of the wealthy plebian Quintus Fufidius is betrothed to Lucius Scaurus, the son of the all-but-bankrupt patrician Marcus Scaurus. At first, it would seem a good match, for the young Fufidia is besotted with Lucius, and her dowry would bring his family out of debt and back into good standing among the Roman nobility. However, evidence soon reaches Cinna, Fufidia’s uncle, brother of her mother Helvia, that Lucius is a coward in battle and sexually submissive to men, both of which are viewed as horrific acts at the time. Cinna, who is both an officer and an accomplished poet, writes a poem and contrives to have Lucius read it aloud at a public poetry reading held by Eucharis, a freed slave and long time mistress of Fufidius. Lucius takes his revenge for the humiliation against Fufidius’ son, who vows to himself to tell no one but to seek his own revenge. After a pre-wedding feast for Lucius and Fufidia, Lucius drops dead of aconite poisoning. Helvia, who had never hidden her hatred for Lucius, is charged with his murder and brought to trial. She is defended by her kinsman Cicero, who naturally gets her off the hook with his logic and rhetoric. More plot twists and revelations occur after the trial concludes, though, wringing out the drama – and the reader – a little bit further.

This novel was, I confess, really hard to get through. I don’t normally mind slow pacing and I usually love complex political intrigue. However, this one was plodding and fairly pedantic. The actual mystery wasn’t terribly mysterious, though a couple of the revelations at the end were mildly surprising. The characters were all excellent, though, if mostly unsympathetic. The historical detail was also impressive and delightful. The latter part of the plot did flow more swiftly, with the trial and various machinations of the families being the most interesting, if you can make it that far. Based on the plot, I would give it 2 stars, but on the historical details it would get 4. I suppose that balances out to 3 stars in my world.

Eventually you will be able to read this review on Discovering Diamonds.