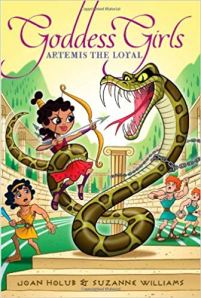 Artemis the Loyal by Joan Holub

In Artemis the Loyal, Artemis is on a mission to convince Principal Zeus, King of the Gods and Ruler of the Heavens, that it is not fair that the Olympic Games are for boys only. She is an excellent athlete and wants to compete, as do many other girls. Artemis goes on a mission to convince Zeus to change his mind and allow girls to have their own girls-only Olympics. Simultaneously, he twin Apollo is determined to take on the Python of Parnassus in a battle of wits. Artemis is concerned because the python can read minds and she knows Apollo can’t tell a lie, so she thinks he will lose. She tries to discourage him from entering the contest and inadvertently causes a rift between them, which is heightened when Apollo utterly scorns her attempts to get Zeus to sign off on a girl Olympics. Artemis has to learn when to lean in and when to let others learn lessons on their own in this latest installment of Holub’s GoddessGirl series.

This was a fun and quick read with my daughter at night for a bedtime read. It was a little more progressive and feminist than the other books in the series thus far in that it had a lot of focus on gender equality. I also liked the theme of figuring out when it is ok to be pushy and try to help and when you need to back off and let others figure things out for themselves. That is something a lot of people need to learn.

I still think the books in general are too focused on what other people think and on hetero-normative crushes, but it wasn’t AS big a focus in this one as in others and it provided a couple times to have a good chat with my daughter about a few things.