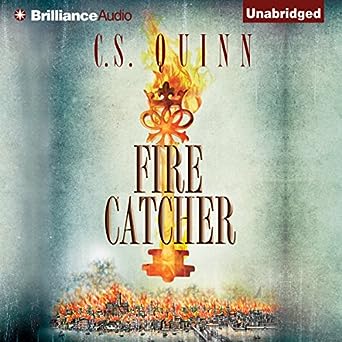 In this second installment of Quinn’s Thief Taker series, Charlie Tuesday finds himself on the hunt for a sea chest which contains papers that have the potential to bring civil war back to England. He and his reluctant new sidekick, a young Gypsy woman name Lily, have to race to find the papers before they burn in the Great Fire of London.

I cheerfully confess that I began reading this series because the first installment, The Thief Taker, was all about the bubonic plague. We all know I have an unhealthy fascination with plague. But this book was kind of a meandering mess. Charlie and Lily run from one clue to another, the fire destroys stuff, the bad guy Blackstone gets badder and crazier, and eventually they find what they are looking for and figure out the mystery. It was actually quite long and rather boring for what could have been a much more interesting story.

I don’t know a ton about that time period – I’m a medievalist, so the 1660s are too modern for me! – but I think this was not a very accurate book. The descriptions of the city didn’t mesh with what I know of historic London. I also don’t know about the Duke of Clarence.

The pacing was another problem for me. While I enjoy a fast-paced book as much as anyone, things happened in this book too fast and without any real purpose. It was like that movie Speed, just too much going on and most of it was eye-roll worthy.

The narrator, Napoleon Ryan, literally was all that kept me listening to this. He did a fantastic job, doing different voices and accents. I could listen to him narrate a lot of things, even if the story isn’t all that compelling.