Sarah’s Secret: A Western Tale of Betrayal and Forgiveness

Sarah’s Secret: A Western Tale of Betrayal and Forgiveness is a story of Sarah, a mother who is widowed at the turn of the 20th century, left with five children to raise. Feeling alone and abandoned, she decides to make the journey from the barren New Mexico territory back to her home in Nebraska. After settling back in with her extended family, Sarah soon discovers that her deceased husband, Sam, had lived a different life before their marriage. This secret life not only haunted Sam when he was alive, but it also affects Sarah and her children after his death.

The author does well weaving historical facts into the three story sections that unfold the tale of Sarah’s and Sam’s lives. From the descriptions of the barren New Mexico desert to the wild streets of Dodge City, Kansas, Scott paints pictures of the past that bring life to the story’s characters and their frontier adventures.

Growing up west of the Mississippi, and being fortunate to have heard the stories of the late 19th century and early 20th century women in my own family helped me to appreciate the struggles faced by this young mother who was left to raise five children. Each chapter was a reminder of how women helped to define the true essence of the pioneer spirit.

In general, however, the story was an insightful tale of one woman’s journey and the experiences she had that defined her strength. It was easy to feel compassion for Sarah as she overcame obstacles and found ways to succeed throughout her life. 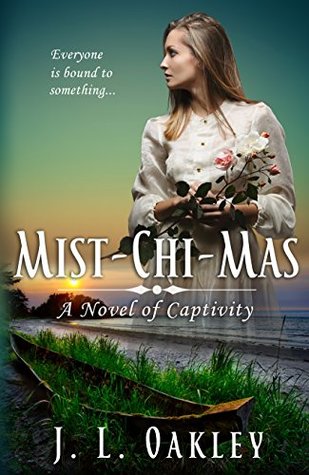 Mist-chi-mas: A Novel of Captivity

Mist-chi-mas: A Novel of Captivity is a powerful story of two people’s lives, their joys, and their heartaches. When Jeannie Naughton Pierce leaves England and journeys to the Pacific Northwest of the 1860s, she hopes to find peace and a life free from the meddling banter of friends and family.  Jeannie turns to the one person in her life, her deceased aunt’s husband, for support and a chance to start anew.  Once Jeannie arrives to the Northwest Territory with her young son, the one person Jeannie does find in her new life is Jonas Breed, her heart’s true love.  Their forbidden romance spans decades and takes readers on the unexpected journeys of the two star-crossed lovers.

The author does an exceptional job weaving the events of the time period into the conflicts that create the adventures experienced by Jonas and Jeannie. Oakley opens the readers’ eyes to the struggles of the native cultures, the discord between the immigrant cultures, and the sea faring trades that are shaping the future of the territory. Not only does Oakley capture the strength of the people, but she also captures their weaknesses. Her knowledge of the 1860s generate a passion and hope in her readers that Jeannie and Jonas eventually find a way past the worldly disputes of the time to find their everlasting fairytale ending.

What everlasting means in a fairy tale is wholly different to what it means in a story mirroring characters that could have lived in a real place and time. As much as an everlasting fairytale ending would be stereotypically satisfying, Oakley stays true to her story. She respects the realities of life and stays true to the story’s theme, and the meaning of mist-chi-mas.

Seriously. What the fuck is it?
Girl's art class project today. ❤️