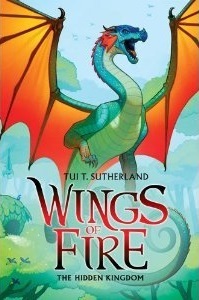 Source: my daughter’s own collection

This is the third book in the Wings (snerk. I mistyped it wongs. I am amused. And, apparently, 12) of Fire series, this time focusing on Glory, the RainWing. The dragonets have decided to travel to Glory’s home in the rainforest to find her tribe, the RainWings, and see if they might be prevailed upon to help them in their quest, or at least shelter them from the SeaWings who are pissed off and chasing them from the previous book. When they get there, they discover that “lazy RainWings” isn’t a euphemism applied to Glory by their mean jailers, it is a breed trait. The RainWings generally know nothing about the land beyond the rainforest, don’t care about anything beyond napping, can’t even read, and basically have nothing much going for them. Nor do they notice or apparently care that various members of their tribe are going missing. Incensed, Glory and the other dragonets decide to find out what is happening and discover magical tunnels, like mini wormholes, that take them in an instant from the rainforest to other parts of the world. One of those takes them directly to SandWing territory, and another to NightWing territory. Glory herself becomes a prisoner after using herself as bait, but makes her escape with the help of a spunky baby dragonet, Kinkajou, and returns to the rainforest to challenge the current queen for the throne.

This was a decent entry in the Wings of Fire series. They are all pretty entertaining so far, for kids’ books, though to date, nothing has managed to come close to my love of the Dragonriders of Pern. But my daughter is enthralled with this series and wanted me to read them, so I am reading them to please her. I remember wanting my mom to read the books I loved when I was little, so I am happy to do the same for my own child.

Anyway. This book focused mainly on Glory as she learned about her tribe, the RainWings. They are perhaps not lazy, more like indifferent to the outside world, ignorant, and irresponsible. It’s like they’ve mentally arrested at the development level of young children, or Republicans but without the generally wilful meanness. They just don’t do things they don’t want to, or that sound boring, or that interfere with their naptime. Glory sees this and is appalled, especially once she realizes that none of them even realise dragons are missing, and no one cares to do anything about it. When she takes her complaint to the Queen, Magnificent, she tells Glory that it’s just a few and there are lots of RainWings, so it’s ok. Glory uses herself as bait to get kidnapped so she can find out where the missing dragons are, gets one tiny dragonet out (with help from said dragonet and Clay), and then challenges the Queen.

Glory develops a lot in this book. She learns to be more empathetic – or else she always was and it just shows more here. When she uses herself as bait, she makes sure to do it in such a way that protects her friends as much as possible. When she challenges the queen, she relies on the RainWings who have helped her to win the throne, which she couldn’t have done if she had used her prophecy friends. She learns to trust people other than herself and rely on people to do their jobs for her when she can’t do it herself. I think that is a good lesson for kids, and for adults as well: we can’t always do everything ourselves, sometimes we need help from our friends, and it’s absolutely fine not to know everything or be able to do it all on our own.

The other dragons are less of a feature, though Kinkajou was sometimes cute and a solid ally. Jambu was as well, though rather annoying. The prophecy dragons were mostly an afterthought in this one and played little role in the plot overall, which may not appeal to major fans of those characters. For myself, I am somewhat indifferent to them and don’t have a favorite, so this wasn’t a problem to me. The story was fine and the resolution of the challenge to the queen was satisfying.

However, there were several unfinished plot threads that I found a bit irksome. I hope they are picked up in book 4 because it would be sloppy otherwise, more so than in the previous book with a couple abandoned plots there. Maybe everything will tie together in later books. This is why I get bored with long series. I like a good, tight plot, dense and intricate but still resolved in two or three books. After that, super long series just become like Grey’s Anatomy or Game of Thrones – bloated and unending and just carrying on for the sake of seeing how much more the writers can wring out of it before sending it to a sad and meaningless death. Hopefully that doesn’t happen here. Sutherland seems a talented writer, so I remain hopeful that she hasn’t forgotten the plots she left behind and will tie them up neatly in the rest of the books.

One thought on “Wings of Fire 3: The Hidden Kingdom”