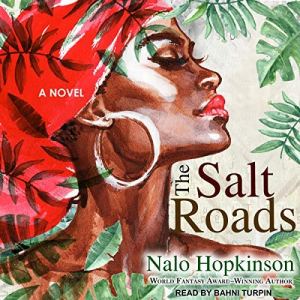 This is the story of a fertility goddess, Ezilie, sometimes called Lasiren, and the women whose bodies she possesses. The main point of view characters are Mer, a healer and slave on a plantation on the island of St. Domingue, what is now Haiti; Jeanne Duval, the Haitian mistress of Charles Baudelaire; and Thais or Meritet, a Nubian slave and prostitute in Alexandria, Egypt, who later becomes known as Mary of Egypt. In nonlinear timelines, the narrative follows the lives of these women as Lasiren inhabits and influences them. Mer is tasked with clearing the salt roads, the connections between Haitian slaves and their African gods. She tries to do so through peaceful means, even though a violent rebel called Makandal is rising in power and urging slaves to revolt against white slave owners. Mer knows her duty is to heal all the Ginen people. Jeanne Duval’s narrative focuses more on economic freedom. She is trying to support herself and her mother, who is ill and can’t afford medicine. To do so, she becomes a stage dancer in hopes of catching the eye of a rich man who will take her as his mistress and set her up in comfort so she can care for herself and her mother. Thais’s story comes pretty late in the book overall, but I think it can represent freedom from sexual slavery, since she was a prostitute and relied on that for survival before Lasiren began interacting with her, driving her to wander the desert. Her interactions with Lasiren eventually resulted in her sainthood.

At first, I admit I didn’t quite get this story. I really enjoyed it, but it took a few days of really thinking about it for me to find the threads that bound it together. I really love that, when a story makes me think and I don’t get it right away. Maybe I still don’t have it right, but this is what I’ve come up with. The various forms of freedom are, I believe, the overarching theme. The salt is the common element which binds women around the world together, through blood, sweat, tears, birth fluids, and sex.

I really enjoyed the way the lives of these women were linked throughout the story. They were so very different, but they each had their own struggles for freedom which bound them together, and Lasiren teased out their desires and eventually managed to bring comfort to them all, even if it was a long time coming.

Each setting was vivid and complex, containing rich cultural details. I hadn’t known, for example, that Makandal was a real man and that he did actually instigate a rebellion on St. Domingue. I learned as well that the Ginen is the Haitian name for the ancestral home of enslaved Africans, and that it referred to the slaves on St. Domingue. I didn’t know that Charles Baudelaire had a Haitian mistress. I had never heard of Mary of Egypt. Now I have so many new things to read about in more depth because of this book!

The narrator, Bahni Turpin, did a stellar job, as she always does. Her accents really bring the characters to life and she dramatizes the story without being melodramatic. She is one of my favorite narrators.

This is definitely one of the most unique books I’ve read ever, and I thoroughly enjoyed it. I highly recommend it and am looking forward to reading more by Nalo Hopkinson.

2 thoughts on “The Salt Roads”