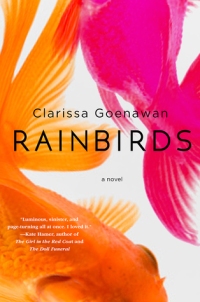 Source: my own collection/BOTM credit

***Spoilers for this book are very much present in this review.***

Ren Ishida comes from Tokyo to a small, unnamed town in Japan after receiving the news that his sister, Keiko, has been murdered. Intending to go and finalize her affairs, Ren finds himself accepting a job as a teacher at her old school and living in her old apartment. He essentially takes on his sister’s old life in many ways, hoping to figure out what happened to her while bringing himself closure as well. In the process, he uncovers many surprising truths about his sister as well as his entire family.

Ehhhhh. I get that this was supposed to be written with a minimalist style, but I don’t think it was actually minimalist. I think it needed to be fleshed the fuck out. This story could have occurred anywhere – there was just no sense of place at all, nothing memorable about the town or surroundings to make it special. The characters were mostly flat and Ren, the main character, was stultifying. He has no real personality. The dialogue was mostly painful and lame throughout as well. Do people really talk like that in Japan? For example:

I nodded. “I teach English at a cram school”

“That makes sense. I was wondering what kind of work you did. You leave the apartment around noon, and return pretty late. I thought you were in retail, like me.”

“That would have made sense, too.”

“Hey, Izumi.” The young man who greeted me earlier approached us. “Sorry to cut in, but your shift is over.”

“Already?” She checked her watch. Her wrist was slim and bony. “You’re right. Thanks for letting me know.” (219)

So stilted. This sounds very similar to some dialogue my daughter wrote in one of her stories. My daughter is eight. It just goes on and on like this throughout the entire book. Nobody seemed genuine at all because of the way their dialogue was written. Maybe I just didn’t care for the style at all, but let’s move past that.

I also didn’t like – at all – how the killer’s identity was discovered but no one cared to give that information to the police, either because it wouldn’t bring back Keiko or because it would ruin the lives of the killer’s family. Um, SO? How would something someone else did have any impact on another person? *I* didn’t kill that person, my relative did it, let me help you throw their ass in the clink! Fuck reputation. Of course it doesn’t bring the murdered person back, but that’s not the point. The point is that you don’t let murderers get away with it. What the fuck? So that was deeply unsatisfying. The end, I felt, just petered out and everything went back to normal and everyone moved on and it was like nothing much happened, just a minor six-month detour in life that we can now forget about and move past. I honestly kept reading this book to see who it was because I wanted them to go to jail, but that didn’t happen and it left a bad taste. I feel like I wasted a whole weekend on this book when I could have been reading the new Guy Gavriel Kay book instead.

I want my BOTM credit back.