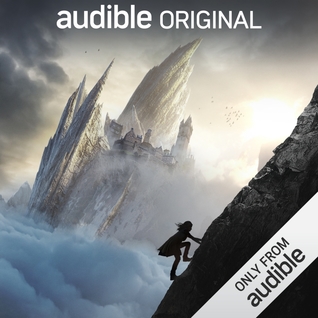 I read it as an: audiobook, which is the only way it’s available currently

In this audio-only story, Marillier takes the fairy tale ‘East of the Sun, West of the Moon’ and delves into the story of the troll princess who is shunned by the handsome prince who turns into a bear. Hulde is a princess, hidden away from the world by her mother, who becomes more abusive as the years pass. Hulde is given human servants to tend to her needs, and for one month every three years, Hulde has a friend, Rune, who comes to visit her. Her mother doesn’t allow mirrors in the Glass Mountain, where they live. Hulde has no real idea she is that different from the humans, and she has been raised to believe that she will marry a beautiful prince on her 16th birthday. When she learns that the prince in question had been cursed by her own mother, Hulde helps his fairy tale come true and then goes on a quest of her own to learn about the outside world, her own people, and how to be brave.

I think it’s a great message that Hulde is shooting for bravery rather than beauty. Despite the title of the book (which I think may be more tongue in cheek than anything?), the focus is not on the way heroine are traditionally beautiful and married to the handsomest prince ever. Hulde learns how to be brave and to appreciate her strength during the course of her quest, including the fact that trust in others is a part of being brave. She also learns that a beautiful person does not always mean they are a good person or are somehow more worthy of love and attention than others.

The emphasis on storytelling woven throughout this story is delightful. It’s almost meta in the references to storytelling and the bards or memorykeepers who deal with stories. Marillier does this a bit in her other works as well, but it just struck me more strongly in this one. A story about a girl who loves stories and uses them to guide her quest in the presence of a troll-bard who tells her stories to help her keep going. Love it!

This story felt a little younger than Marillier’s usual work, but it was still a thoroughly enjoyable tale. Perhaps it’s because it is only available as an audiobook/ Audible Original that it wasn’t quite as nuanced as her usual style. In any case, it was pleasing to this long-time fan, and would make a great intro to her for younger listeners. While not a children’s story, I would have no hesitation at all letting my young daughter listen to this.

I loved this book so much! I loved Rocky especially. He is a good good good character! IYKYK
An interesting but flawed book. I liked it overall but I didn't like a lot of separate things within it. A longer and much more articulate review is on my blog.
I might have cut my hair
This is what an actual pro life book reads like. If I were to say I'm pro life, it would look similar to this. This author is trying to prevent abortions by - holy shit - being logical and suggesting ideas that actually work.