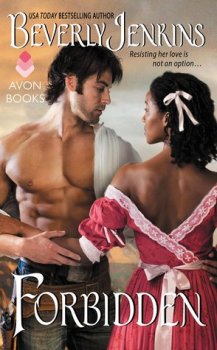 Eddy Carmichael (pronouced Edie – I was confused when I saw it spelled out because I listened to this as an audiobook) is an independent woman, determined to go to San Francisco and open her own restaurant. On her way from her home in Denver, Eddy encounters all manner of folk from the genuinely helpful to conmen and thieves. Her journey stalls out in Virginia City, NV, where she nearly dies from being dumped in the desert by a conman who stole all her money. Lucky for Eddy, a townsman, Rhine Fontaine is riding out and spots Eddy, unconscious. He takes her back to town and gives her into the care of Miss Sylvie. Rhine has worked hard to create and maintain his own little empire and is one of Virginia City’s most popular and prominent citizens. Eddy and Rhine are, of course, instantly attracted to one another but Eddy fights to hide it, because in post-Civil War America, interracial relationships are against the law.

Meh. Romance. They just… All seem the same to me, even ones that are obviously well written like this one. It did have some interesting things to say about politics. Nothing much has changed in that regard for a very long time, it seems. Shame on us.

There were also some interesting points about Black culture and passing as white, which of course backfire spectacularly when it becomes known that Rhine is passing as white and he is really biracial.

I recognize that this was a well written book by a very popular romance writer. But honestly. I think every romance I’ve ever read follows the plot of Innocent Virgin gets rescued from Some Kind of Danger by a Playboy, who instantly falls in love with said Innocent Virgin, repents of his wild ways, and sets about winning her heart, which will always happen eventually. It’s sooooo boring. I also just hate it when a woman gives up her dreams for a man. Sure, Eddy basically got everything she wanted in the end, but it was so unrealistic and worked out perfectly that I just can’t. Why doesn’t she say she’s going to SF and if he wants to come, he can? Or why isn’t that something that the man offers? Or why aren’t readers left guessing for the better part of the book who the lady’s love interest is rather than introducing two characters and that’s it, you know who will wind up together. I guess I just don’t understand the appeal of romance novels, but hey, read whatever floats your boat. For me, that isn’t romance. Not really my cuppa; literally, I only read so I could check off a box for the 2019 Read Harder challenge.

One thought on “Forbidden”