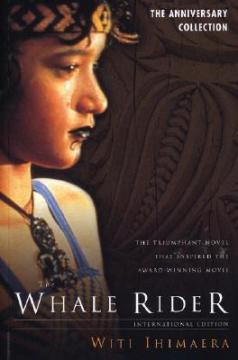 I read it as an: audiobooks

This is the story of Kahu, a young Maori girl who badly wants to be loved by her great-grandfather, her tribe’s chief. He has no time for any girl children and is absorbed in his duties and responsibilities as the chief. Their tribe, which claims descent from the legendary whale rider of myth,  always has a male chief but now there is no male heir. To gain her great-grandad’s approval, Kahu struggles to learn the stories and roles of her tribe and show everyone that she is worthy. Among her allies is the spirit of the whale rider himself.

This is, apparently, a very well known legend in New Zealand. I confess I had no knowledge of it other than a vague recollection from the film, which I saw years ago. It was interesting to learn about Maori culture and language in modern times. The struggles indigenous peoples around the world still face are incredible. Why are we so awful to each other?

I didn’t care for the narrator too much. He made his voice sound really, badly high when he was speaking a woman’s lines. No. Don’t do that. He was fine for the various men’s voices, though, and said Maori words with what appeared to be fluency. Not knowing a single word of the Maori language, I wouldn’t know if they were pronounced incorrectly anyway. I enjoyed how the native language was spread throughout the book.

I found the writing style to be rather simple, or simplified perhaps, which was sort of a turnoff. I also found it an odd choice for the story to be told from Kahu’s uncle’s point of view. Why not from Kahu’s herself? Or even her great-grandad? It just seemed a weird person to act as the narrator.

Overall, I’m glad I listened to it, always like learning more about a culture, but I didn’t realllllly care for this one too much.

One thought on “Whale Rider”