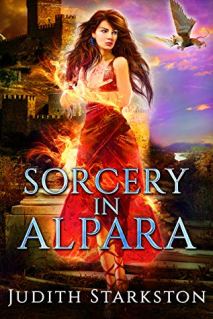 Source: digital ARC from the author

This second novel in Starkston’s Tesha series picks up right where the first story, Priestess of Ishana, left off. Tesha and Hattu are newly married and traveling to Alpara, his capitol city. Tesha is to be crowned as Hattu’s queen and rule beside him. Instead, as they travel through hostile lands, a dark force attacks Hattu and his army. Tesha frees the army through the use of her skills as a priestess of Ishana, but at a steep price. Tesha is drained of her strength and power, unable to move or speak. As she gradually recovers, under the care of her sister Daniti, it becomes clear to Tesha that Hattu has been overcome by the same dark force. Tesha must struggle against betrayals that take everything she holds dear from her, save Hattu and her new kingdom, without sacrificing herself in the process.

Second novels in a trilogy often struggle with a sluggish plot in some odd sort of literary ‘middle child syndrome.’ Sorcery in Alpara definitely does not suffer from this problem. From the start, it is full of action and magic, love and despair. Readers get several gut-punches as Tesha fights to save those she loves, even while being unjustly accused of a crime she didn’t commit.

A major subplot of the novel involves Tesha’s older sister, Daniti, who was taken captive by a faction of Hattu’s enemies. Daniti uses all her considerable skills to delay her captors from carrying out their plans. Helping her is Marak, Hattu’s second-in-command, who had allowed himself to be taken hostage to protect Daniti. Their whole story, while not quite as fraught as Tesha and Hattu’s, is intriguing and highlights some of the facets of being disabled in the ancient world. Daniti’s blindness doesn’t hinder her ability to be a formidable ally to Tesha and fierce enemy to Paskans and others who would overthrow her brother-in-law.

Hattu’s people, the Hitolians, are based on the ancient Hittites. Starkston does a masterful job weaving in elements of their culture and religious practices throughout her writing. The religious rituals the Hittites practiced lend themselves extraordinarily well to creating the magic spells Tesha and other priestesses use in this series. Using historically accurate details to turn them to one’s own purpose in a story really helps create a richer reading experience. Starkston has this practice well in hand and she uses her impeccable research on the Hittite culture to modify and implement magic rites within the world she has built around Tesha, who is herself based on a real life Hittite queen, Puduhepa.

In short, this is an excellent addition to the Tesha series. I can’t wait to buy a hard copy for my own library. Strongly recommended to anyone who loves historical fantasy, or who has an appreciation for well researched books with a seriously fun plot.

PLEASE NOTE: If you go to the author’s website, you can preorder a copy of this book for $2.99 on kindle. When you preorder Sorcery in Alpara, you get a free short story which continues the narrative of Anna, a prequel story to the Tesha series. The first short story installment comes when you sign up for Judith’s newsletter. I’ve received both and the short story and the newsletter are entirely worth your time.

A surprisingly sad read but so, so good.
Just read that Bleeker Street got the rights to Jason Isaacs's movie, Mass! YAY!! I wanted to see this at Sundance but I missed the window to watch it.
What did I just read?
My mom's bird is determined to make Pixie kill her while she's staying with us. 😬