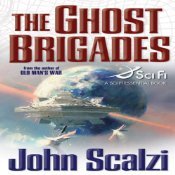 The second in the Old Man’s War series, The Ghost Brigades focuses on the section of troops within the Colonial Defense Forces that are bred purely for fighting. Jared Dirac is something of an exception. He is a hybrid of the superhuman CDF soldiers and Charles Boutin, a notorious turncoat. The idea had been to transplant Boutin’s memories into a CDF clone of himself, but that failed and so Jared was given to the Ghost Brigades. Eventually, Jared’s ability to access Boutin’s memories works and he and his fellow soldiers go to hunt down the real Boutin before an alien alliance can devastate all of humanity.

I think this is my least favorite Scalzi novel so far. It isn’t badly written or boring, but I felt it was a little long on discussion and a little short on action until near the end. To be fair, it would be hard, I think, to improve upon the titular novel in the series, Old Man’s War, which was one of the best sci-fi books I’ve read in years. Ghost Brigades wasn’t a sequel so much as a standalone novel set in the same world as OMW. I like standalone books and get weary of series that go on forever.

Overall, this was fun and well worth the time to listen to it, but my favorite Scalzi is still Redshirts. 🙂