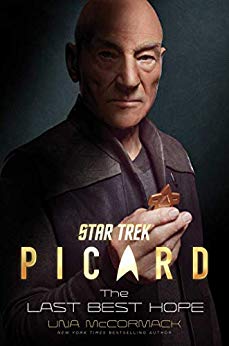 The Last Best Hope is the story of the mission Jean-Luc Picard led to evacuate Romulans from their home world and nearby planets when their sun went supernova. It is the prequel that forms the foundations of the Star Trek: Picard series. On its surface, it is the story of how one of the most beloved figures in all of science fiction ended his career. Digging deeper, it examines some of the darker aspects of humanity that we all carry.

I confess that I didn’t like the first season of STP very much. I only watched the season once and didn’t care at all for, well, most of it. Not because it wasn’t just TNG rebooted. I neither wanted nor expected that. I think it’s mostly that I didn’t recognize the characters in it. They were too changed, too damaged. I went into this book hoping it would help me like the show better, especially since McCormack is one of my favorite Trek authors.

I suppose it did that. I can understand how it would completely fuck with you to be put in command of THE biggest humanitarian mission in history, only for it to fail. And to fail largely because of politics? Adding insult to injury. Star Trek has always been political. It’s one of the many things I love about it. The Picard series, and this book, are no exceptions. The difference this time is that the politicians here are truly awful, with not the remotest veneer of idealism that they portray in the series. The political leaders of the Federation in this book are concerned with optics, with PR, with the cost to themselves. Councilor Quest is repugnant. She represents, to me, the worst of certain American political parties. I won’t say which but it starts with an R and ends with -epublican. Nationalism and only looking after one’s own interests is such bullshit and yet it’s on the rise. This book takes a look at the potential impact of nationalism, distanced through the lens of sci-fi. There were lots of oblique references to the Trump administration, trumpism, and nationalism. I’m so fucking glad he’s out of office and fuck anyone who gave this book a lower review just because it rightly was critical of those kinds of politics. We should take care of everyone, not just those in our immediate circle.

Picard, in TNG, is an idealist and a compassionate man. But he’s tempered with logic and pragmatism as well. Picard here gets so involved in the mission to save the Romulans that he becomes pretty myopic in his determination to fulfill the mission. If millions and millions of lives were in my hands, I probably would be myopic about my job, too (Actually, no, you could just put me in a padded room and have done with it if that task fell to me). I know some readers felt this Picard was a bit too starry-eyed, almost naive especially with regards to political machinations, but I felt that he was throwing himself headlong into the ideals of what Starfleet stood for. His doing so is the only way I can see to really explain his utter disenchantment with the fleet when the Romulan star blows and he fails in his mission. If he hadn’t been so involved, maybe more of his pragmatism would have prevailed and he would have been able to remain in the service. He still would have been horrified and grief-stricken at the loss of life, but he could have taken that extra distance to realize it was a futile effort from the start and to celebrate the lives they WERE able to save. But he wasn’t, and didn’t, and so railroaded his career, thus setting up the premise for the TV series.

I do wish there had been more detail from the planets. We got some, but it would have made the story more visceral if we had seen more scenes from Romulus, the effect the supernova had on the citizens. What scenes we do get felt rushed a bit, more told than shown. Not that I want vivid descriptions of dying and suffering people. But it would have been just that much more depth to the story.

And, maybe not super relevant to the story, but I thought Maddox/Jurati was gross. I can’t remember how her character was in the show so maybe McCormack picked up on something from that and ran with it. But Jurati in this novel was like everything I wouldn’t want to be as a woman. Yes, it’s rad she has a doctorate in robotics and is whip smart. I love that part about her. But she acts like a submissive, insecure little mouse who is desperate for Maddox’s approval, which makes her come off as pathetic. It’s such a big dichotomy, and unlike most of the other women in Star Trek that McCormack has written, and I haven’t figured out why it exists.

Rereading what I just wrote, it sounds like a negative review. It absolutely is not. I loved this book, but I hated a lot of the people in it. I think that’s a sign of good writing, to make me hate a thing about a figure I’ve loved for the majority of my life, or to hate elements of the society I grew up watching and hoping to achieve in reality. I unreservedly recommend this book, especially if you haven’t yet seen the Picard series. It fills in a lot of gaps in the Picard series. I think it will be a good book to help build the Picard series canon.

“Go on,” Raffi whispered. “They’re dying for you to say it.”

“I’ll look forward to using that on you one day,” she said.

“A fiction. A tale. Something made up.”

“A lie?” The boy looked puzzled.

“It’s worse than that, Kirsten. Tell a lie often enough, and it stands a good chance of becoming the truth.” (p 214)