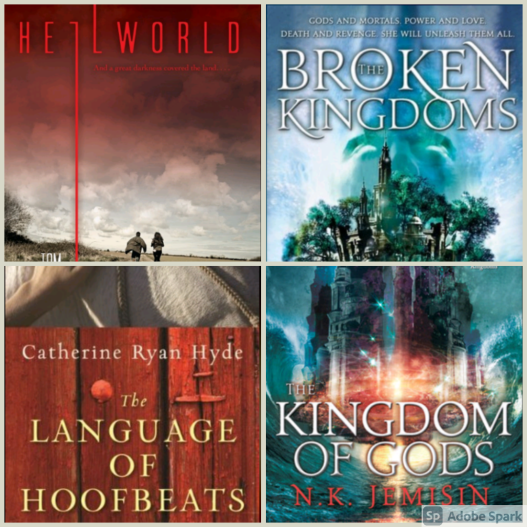 I liked it more than the typical 3-star book but not as much as a 4-star. So, 3.5 stars! I’m so smrt. 🤪 A lesbian couple, Jackie and Paula, moved to a small town with their adopted son and two foster children. Across the road from their new digs lives Clementine, the town shrew. She hates everything and everyone and blames it on her daughter’s suicide which, frankly, I think is totally valid. I would hate everything and everyone, too. But she apparently was always like that and she ends up driving her husband away and her treatment of Comet, her daughter’s horse, causes Star, Jackie and Paula’s troubled foster girl, to run away with him. Various dramas ensue and in the end, Clementine decides to be nice, just like that, and everything turns out bright and shiny.

For a piece of fluff, this was good. I liked the kids and their histories and I think it was nice that they weren’t written as all escapees from Hell or a mental asylum, nor that they automatically fit right in and adapted to being a foster kid. I thought Jackie and Paula were well developed enough that they were different on the page, but overall they were fairly one-dimensional. Clementine had development, but I didn’t find it all that believable. Still, she was the most richly-depicted adult in the book, a character you love to hate. I would read more by this author, though I’d probably get it from the library rather than spend my own money on it.

This was a fast read. I like to support local authors and I bought this one and another of Leveen’s books at a local book festival a couple years ago. So that was fun. He is a delightful human being from what I could tell. And I did enjoy this one, but I generally have a very hard time with most horror. Not because I get spooked – I don’t. It’s because I can’t suspend my disbelief. It’s why I don’t like werewolf or zombie or even sexy vampire stories all that much. They simply aren’t believable to me. Why I have a hard time suspending disbelief for horror and not for the billions of SFF books I’ve read over the years, I have no fucking clue.

That said, I really liked the vast majority of this book. It was told in a sort of back and forth timeline, the same characters living in the moment for one chapter and then the next chapter being set X number of days, weeks, or months ago. I thought the characters were nicely developed for a genre novel. That’s not shade – genre novels don’t focus as much on character development, but these characters all felt like they had a history and experiences that made them people, not just templates of people like you find in a lot of genre novels. The crux of the plot is that four teens lost their parents a number of years ago while filming a show that sounds similar to Ghost Hunters. They were exploring a cave in the Arizona desert and never came out. The kids go gallivanting off to find them, but whoops! Instead they accidentally open an ancient ark of some kind that lets out gigantic monster bug things that can shoot lasers and fireballs and they start annihilating nuclear power plants, hospitals, schools, and news organizations. You know. Kind of like the Republicans want to do.

I’m not entirely sure the whole story isn’t actually an analogy about the GOP, in fact…

Setting: The city of Shadow, in the Hundred Thousand Kingdoms

(The Broken Kingdoms) A blind artist called Oree takes in a homeless man who glows. She can see some things like magic and the homeless man, who Oree names Shiny since he won’t tell her his name, throws magic all over. Also, someone is murdering godlings and now Oree is smack in the middle of it thanks to her act of kindness. Shiny happens to be Itempas, so you know things are going to get weird.

(The Kingdom of Gods) The gods of the Arameri are finally free and now they’re pissed, but they’re also all that is keeping the world from descending into unending war and annihilation. Good times. This one is told from the perspective of the godling Sieh, who has been changed into a mortal and is aging in leaps over time.

As always, crazy rich world-building and awesome characters in both of these books. I will want to read them again one day, only with my eyeballs, because the narrator was what kept these from being 4 star books. Her voice was too calm and unchanging and I found myself bored of listening to her. Once, someone ripped a heart out of someone else’s chest with their bare hands – and I missed that at first because there was just no emotion or anything to indicate exciting action in her voice.

I really love Jemisin’s writing. It’s so complex and descriptive. She takes familiar fantasy tropes and turns them on their head. Some people might think that is heretical but I think it’s brilliant and it makes for a wholly new reading experience. One should never assume she will let the good guys win or allow a happily ever after in her books. I really, really appreciate that. She has said that she set out to subvert the genre and she has been successful in doing so.