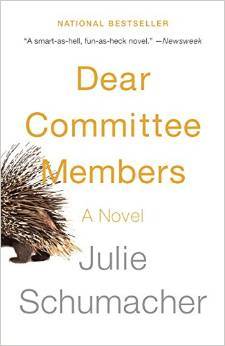 In this fictional collection of letters of recommendation and various other correspondences from beleaguered professor of creative writing Jason Fitger, readers are given a hilarious and rather accurate insight into traditional academia. Fitger’s acerbic wit is a delight, and is frankly necessary at times to show the ludicrousness of various aspects to academic life. The story follows, loosely, the efforts of one of Fitger’s graduate students to find and be awarded with grants, scholarships, fellowships, random jobs, and other means by which he can support himself while finishing a novel he had begun prior to his graduate work, as seen from the point of view of Fitger and his correspondence. It is by turns riotously funny, deeply introspective, and sometimes wistful or regretful.

As I listened to this, it made me simultaneously an iota relieved not to have to deal with these kinds of academic Gordian knots, and also sad that I didn’t complete a PhD and get to partake in the adventure. Maybe I am not too old yet to do so. In any case, this book made me literally howl with laughter. I’m sure my fellow commuters who might have seen me must have thought I was insane, finally having come to the end of my rope because of rush hour traffic. I’m just glad I didn’t crash my car in the process.

To anyone who loves academia or who is considering a career in higher academics, you absolutely must read this book, or listen to the audio version, which is narrated by a man with a voice like Kelsey Grammar/Frasier Crane. Robertson Dean is a perfect choice of narrator for this; he gives an excellent performance and brings to life the depths of Fitger’s disdain for a multitude of people and actions.

One thought on “Dear Committee Members”