The Book of Essie 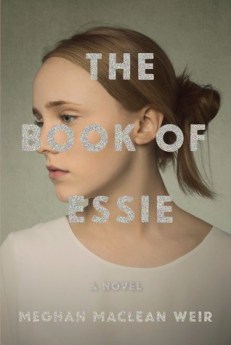 Seventeen year old Esther Anne Hicks, known as Essie, is the youngest child of a famous TV preacher, similar to the Duggars. Essie has grown up with cameras always on, hair and makeup having to be done Just So all the time, most of the family’s conversations scripted and rehearsed. Everyone who watches their show of course thinks the Hicks family is perfect and a model of Christian whatever. The issue, though, is that Essie is pregnant. Her mother has a meeting with the show’s manager, excluding Essie from the discussion, about what to do – do they sneak her out of the country for an abortion? Does Essie’s mother fake a pregnancy to be able to claim it as hers? Essie convinces her mother to marry Roarke Richards, a boy at her school. Roarke’s parents are deep in the hole and are about to lose everything they have. An ‘arrangement’ with the Hicks wherein Roarke marries Essie will ensure that the Hicks will pay off all their debts and allow them to be comfortable for life. Against all odds, they talk Roarke into this plan. But he and Essie each have secrets that they fear to share with anyone.

I thought this was an interesting book, not at all preachy or like it was trying to convert me. If it had been any of those things, I would have dropped it like a load of bricks. There is certainly plenty of commentary to be made on the ways in which people, especially celebrities, can live a double life. They have their TV persona, and their real one; often, they do not align at all. The Hicks are maybe the worst kind of celebrities – holier than thou on screen, using their platform to preach against things like abortion, using religion to justify bigotry and racism, yet being completely hypocritical when it comes to their own real lives. It is an exaggerated way to see how many religious people seem to those of us who aren’t. Certainly not all religious folks are hypocrites or hatemongers, and I know (and am even related to) several who actually practice what they preach. But the Hicks family is just… gross. They publicly condemn abortion and yet take Essie to Cuba to get abortion pills in secret. They swear by ‘family values’, whatever the fuck those are, and being a loving spouse while lying about Essie and Roarke’s staged courtship and making people believe they actually fell in love and want to get married. Oh, and allowing their son to rape their daughters and cover it up. Essie’s older sister, Lissa, had endured the same thing, but she made her escape by going away to college and telling everyone to piss off, she didn’t want any cameras in her face ever again. They shun one of their cousins because he is gay. Just genuinely revolting humans.

Essie is NOT like her family, though. If she was, I couldn’t have tolerated this. She and Roarke make a plan to get back at her family once they are married, which should allow them to live their lives in peace. But Essie has to trust her darkest secrets to Liberty Bell, a journalist with baggage of her own. Roarke, too, learns to trust both Liberty and Essie, and despite the fact that they had their marriage arranged, it seems like they will actually have a decent life together because of the friendship they form. Theirs won’t be any sort of traditional marriage, which is awesome, because Roark is gay. It would just chap her family’s ass if they knew about that, and I love it.

There are themes of feminism, abuse, religion, cult mentality, and heroism throughout. I like that these are addressed in some fashion. However, I just can’t buy the idea that Essie, raised in a tiny town in an ultra-conservative house with religion being forced down her throat at every turn, would grow up to be a rebel and free-thinker. I suppose it is possible, but what is the likelihood, really? I do admire her determination to implode her entire family in the most publicly humiliating way possible; however, there’s no denying that she is a master manipulator, lying and hiding secrets with the best of them, until she can get her plan to come to fruition.

At the end of the day, I don’t know. I read this book quickly, but don’t think I actually liked it. It was full of YA stereotypes – like, ALL the stereotypes – and was just one tragedy, or discovery of past trauma, after another. I didn’t feel connected to any of the characters and found most of them to be fairly one-dimensional. Maybe that is just because a religious TV-famous life is almost literally the exact opposite of anything I value or believe in. They just didn’t feel like real people to me, so I had a hard time caring about them, despite the many awful experiences they endured. The plot was also really predictable. The prose itself was nicely done, and there were even some lines I genuinely liked, but I just found the plot to be excessive and pedestrian.

Overall, I think if you really dig teens trying to blow up their religious nutjob families, then this might be for you. It was mostly a miss for me.