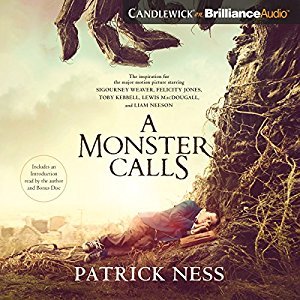 Genre: YA, possibly a little younger

All the spoilers below!

Connor O’Malley is a 13-year-old boy whose mother is battling cancer, only no one really calls it that. She is also dying, but no one talks about that, either. Every night since his mother started her treatments, Connor has had the same nightmare. One night, he wakes up and finds a monster outside his window. He had expected the one from his dreams but it wasn’t; it was an actual monster that comes from ancient British folklore. It tells Connor that he himself summoned the monster because he wants something from it. With each encounter Connor has with this creature, the closer he comes to the truth, painful and bright.

I confess I bought this audiobook purely because Jason Isaacs narrates it and, since it’s a kid’s story, I figured I could just put it on and not pay much attention to it beyond being delighted to hear Isaacs’s lovely, gravelly British voice reading to me. I never expected that I would actually like the story, which I did, immensely. The story was not about cancer or illness so much as a study in grief from both a young boy’s perspective and his mother’s. It is about how childhood friendships shift during times of tragedy and how we learn who our true friends are.

I really loved the theme of stories taking on lives of their own. The monster tells Connor that ‘Stories are wild creatures. When you let them loose, who knows what havoc they might wreak?’ I like this passage because it shows how stories can be interpreted differently by different people, how each person might take a wholly new meaning from it or react to it in an unexpected way. They may not even anticipate how they themselves will react until the story is told. Connor reacts more and more violently with each story the monster tells. If his situation had been different and he heard the same stories, undoubtedly his reactions would not have been the same. Similarly, when writing a story, I’m sure many authors don’t know exactly where their story will go, how it will end up. I can’t be the only writer who is often surprised by what my characters decide to do. Stories weave themselves into the fabric of culture and inform society at many levels; the monster is just highlighting that fact in ways Connor doesn’t always appreciate.

Another big theme is truth. Connor’s mother has cancer. Truth. She is going to die. Truth. No one comes out and directly says any of this, beating around the bush about it, even though everyone knows what is going to happen. The monster helps Connor to see that the truth, though often painful, is the only way he can be healed, and that that is why the monster came. Not to heal Connor’s mother, but to heal Connor himself. Connor has to learn that the truth is the only way he can learn to let his mother go and also the only way to live through it. And he has to learn to forgive himself. Everyone lies to themselves sometimes, and to others. It is a human trait to ward off pain and to comfort themselves. But ultimately, facing the truth is the only way to relieve that pain, no matter how pleasant the lie is.

Learning a little bit of woodlore is always an added bonus. There was a lot of discussion about the yew tree, which is what the monster is. Yew trees are what the dreaded English longbows were made from in the Middle Ages. The tree is symbolic of death, rebirth, and immortality likely because old yew branches that droop to the ground can take root and grow new yew trees and they are incredibly long-lived. There are a lot of churches in Britain that have yew trees around them, particularly in cemeteries. They are highly toxic and their needles can produce fatal results if ingested. The berries are also hallucinogenic and lethal. The tree can also symbolise silence, introspection, and aloofness, possibly because they’re very twisty trees with lots of nooks and crannies for solitary creatures to live in, or for ways to the Underworld in Celtic mythology. The Long, Long Life of Trees by Fiona Stafford would make an interesting companion read, at least her chapter on yew.

As for the audiobook element, yes, I got it for Jason Isaacs. However, he honestly is an excellent narrator, doing various voices and accents with great facility. His performance draws listeners into the story swiftly and seamlessly. He is one of my favorite narrators, right alongside David Tennant, Simon Preble, Davina Porter, Wil Wheaton, and Simon Vance.