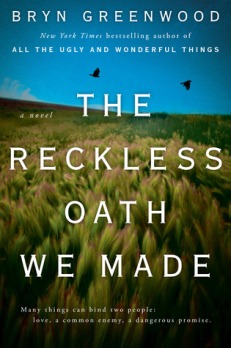 Zhorzha ‘Zee’ Trego means well but still destroys everything she touches. She is a wreck, works menial jobs, and runs dope on occasion to make some extra cash. While in PT from a previous motorcycle wreck, she meets Gentry Frank. Gentry is on the spectrum and is convinced that he is a knight who is sworn to champion Zee. Together, they get swept up in a tragedy of events revolving around Zee’s sister and nephew, and choices they make will alter the rest of their lives.

This novel was a little like Gone Girl in that, with the exception of Gentry, there really wasn’t one likable character in the lot. But it was a terrific story and I couldn’t put it down. Zee is nothing but a hot mess and it is really frustrating to read. She is smart and could do so many better things with her life than wait tables and do the occasional drug run. Not that there is anything wrong with waiting tables, but I still feel bad for her and frustrated that she isn’t really trying to do something better when she has the talent / intelligence to do so. Maybe that is my own privilege talking but I just don’t get why someone in her position wouldn’t want to at least try to do something like go to college and get into a better socioeconomic status. She is really her own worst enemy and seems determined to make many of the same mistakes over and over.

I loved Gentry. He is on the spectrum, speaks only in a quasi-Middle English dialect he learned from the SCA and medieval texts he reads, and is utterly convinced he is a knight whose purpose is to serve ‘Lady Zhorzha.’ He is well read and so imaginative. It was so sad to hear that people wanted to make him take meds to force him to talk ‘normally’, whatever that is, and to silence the voices he had. Hearing voices sounds scary to a lot of people but Gentry’s are harmless, as is he, and I am willing to bet a lot more people hear voices than will admit to it and do just fine. Maybe it’s because I am a medievalist, but I just had a big soft spot for Gentry and frankly think it would be fine by me if more men acted chivalrously.

I loved the way Gentry spoke and I don’t think it would be difficult for other readers to get used to it quickly. It’s not like it’s Linear A or anything, it’s just a little antiquated. Frankly, some of the ways Gentry speaks is easier to read than Shakespeare, and he wrote in early modern English. I would imagine it is even easier to listen to on audio than to eyeball read it, especially if one isn’t familiar with Middle English. Just let yourself skim over it or listen with half an ear and don’t worry about it too much, then it will be easy.

Overall, while this was a frustrating read for many reasons, it was because Greenwood crafted an excellent story with realistic characters. All of them, even the ones I hated, were like actual people I have known. It was very nicely done, easy to read, and I highly recommend it.

2 thoughts on “The Reckless Oath We Made”

A proper space opera. This was such a fun book! Got the next two line up and ready to go!
My friend @print_and_bind did a post of books with floral covers the other day and so I wanted to copy her. I fiddled with the design and now you can't actually SEE the covers. Good job, me! But it was fun anyway.
I know the James Bond books were mostly written in the '60s but come on. Just gross. Not even Jason Isaacs narrating it could make it better and I finally just had to DNF it after 3 hours. The films, even the bad ones, are better than the books.
A book club read I never would have picked up otherwise. That title sounds like a romance. Ugh. But it's not! And it ended up on my list of top reads for 2021!