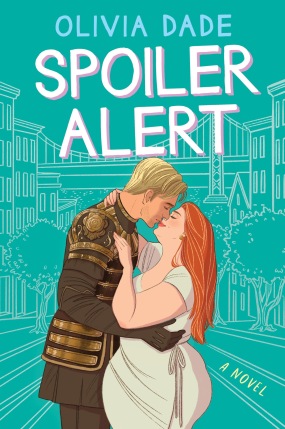 April Whittier is a fandom nerd, and proud of it. She writes fanfiction about her favorite show in her free time, and she loves cosplay. She has never really shared her true identity with her online friends, though, because she is worried they will reject her for being fat. When she decides she wants a change in her life, she posts an image of herself on Twitter in full cosplay regalia. Many people are very kind and supportive, but there are the inevitable fat-shaming assholes who bully her. The lead actor of the show she loves, Marcus Caster-Rupp, sees it happening online and decides to ask her on a date to dinner. She cautiously accepts, not sure if she is interested in what she sees as a PR stunt. When she arrives at the restaurant, April is stunned not only to find that the two of them have instant chemistry but that Marcus seems to have a much deeper side to his personality than his vapidly narcissistic public persona implies. He also has secrets, the biggest of which is that he is the friend who has been beta reading all her fanfic for years. Marcus found that out by accident and doesn’t know what to do with the information. Cue things going right, then spectacularly wrong, and adult angst.

So I really do not read romance. I read this one to tick a box for a couple of reading challenges I’m doing for 2021. I picked it because I am intimately familiar with fandom and fanfic and cons and everything associated with geekdom so I thought it would be somewhat more tolerable than the usual romance novel. I was surprised to find that not only was it tolerable, but I actually really liked it! I think that proves fandom just makes everything better, right? Yes, you know what is going to happen in the end. Yes, there is angst and some silly stuff. But April and Marcus are both really well developed characters and have complexity and depth. They are not both hot young things. They are 35 and 40, respectively, have had their share of relationships in the past, have lives outside of each other, and are thoroughly independent. I liked it. I didn’t ever think that either of them was a sucker or codependent or pitiful.

A big part of this book was how accepting April was of her body. She didn’t feel shame for being fat, and she learned how to stick up for herself if people started fat shaming her. The book showed that it isn’t just the skinny people who can have a HEA or a relationship with a conventionally attractive person. Marcus thought right from the moment he saw April’s coplay picture on Twitter that she was beautiful and genuinely didn’t seem to understand why others didn’t think so as well. He loved her body, which is terrific, but not necessary because April already knows she’s hot. I loved seeing the body positivity, though.

The secondary characters are also pretty well developed, though some more than others. There is a blurb at the back of the book that indicates two of the secondary figures will be getting their own book in summer of this year, so that is nice since I liked one of them a great deal. I may or may not read it (I probably will), but either way, I’m glad the author is getting established in her field. Based on this book and her author bio, she seems exactly like the kind of person I want to be friends with.

Overall, a delightfully geeky love story that should appeal to anyone who knows what it’s like to belong to a fandom family.

The Second Blind Son by Amy Harmon is a lovely addition to the Saylock series. Can't wait to read more!
My girl helped me make supper - Korean ground beef - and did the plating all by herself. ♥️
Finally finished an embroidery project. Not my best but good practice at least!
This made me smile so I thought I'd spread the love.