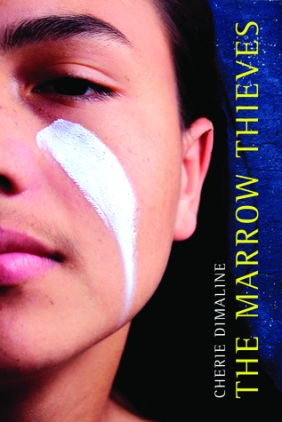 Frenchie is a 15 year old boy from what is left of Canada’s First Nations Anishinaabe people. He is traveling with a group of other people from various Indigenous backgrounds, trying to avoid capture by the “recruiters,” the non-Indigenous people who have lost their ability to dream. The Native people are being hunted because they still have the ability to dream, and so the rest of the world wants them in the hopes of finding a cure for the dreamlessness that is causing mass suicide and madness.

This story had so much potential and an interesting premise, but it was not executed well at all. There is almost no character development for any of the people, very little back story, and no real plot. French and his group wander vaguely northward for the whole book, seeking some hopeful place where they will not be hunted anymore. The love story between French and Rose is forced and fake. The death of one of the group members seemed contrived simply for emotional impact, but since none of the characters had any real depth, it was pretty meaningless.

The title implies the crux of the story had something to do with, well, marrow. But it turns out that the key to the dream plague is the ability to dream in one’s native language. This information was almost a throwaway line and I nearly missed it. But even with that evidence, there is no explanation for how Minerva was able to destroy the machine at the School when the recruiters were trying to harvest her marrow, or why she was used in such a role in the book when she was mostly dead weight the rest of the time. All of a sudden, she’s the key to solving all the world’s problems? Right.

The marrow itself is also a problem. I can’t remember what it’s called, but I think there is a technology we have NOW that allows a small sample of DNA to be replicated so the original sample isn’t destroyed. I remember reading about it in a true crime book and it is often used to solve murders where there isn’t a lot of DNA evidence. If we have the technology NOW, then believing the premise of the entire book – that Natives are being hunted for their marrow – becomes nearly impossible. If you have a dystopia, it needs to be believable to be effective as a story. But given the technology we already have, it’s impossible to think there would be any reason to hunt Native peoples for their marrow when a sample could just be collected and replicated.

Also, French and his group spend the whole book trying to avoid the Schools and recruiters, and yet not once do we see one of the Schools. We don’t know what is being done to the Natives in them, there is no grand plan to rescue all the people from a nearby School, nothing. If the goal was to make the Schools seem monolithic and terrifying, then it really fell flat.  The closest we got was the rescue attempt to get Minerva back, and that didn’t even occur near a School. It seemed to exist simply to provide a reason to say she dreamed in her native language, which could have been said at any time without a pointless action sequence. Similarly, there was no discussion on how people lost the ability to dream, what caused it, how it is linked to climate change, or anything else.

As a metaphor for the ways in which we have mistreated both Indigenous peoples and nature, it was a little ham-handed. Yes, I totally agree that white people are historically awful and continue to be today. Yes, Indigenous peoples all have a rich culture of their own and they should be fostered and supported, not torn down or assimilated. Yes, they experienced awful trauma because of colonization. I am not trying to criticize that aspect of the book, because learning and understanding history from various perspectives is important. I’m glad I read this since I do try hard to read diversely, but I also don’t feel like I came away with any better understanding of Native American or First Nations cultures at all, or how colonization fucked them over and became part of their story.

Mostly, it seemed to be a meandering, plotless story with Indians running around in the woods. I think the book fell victim to the stereotypes it was trying to dismantle.

Usually by book 4 or 5 in a series, I've largely lost interest. But The Expanse novels just keep getting better. I fucking love this series.
The dogs at our cabin. Pixie is the smartest dog we've ever had and Maisie is really just about the dumbest. But they make us laugh everyday.
I liked this one way more than I thought I would. Engaging main character, good narration, and interesting story.
Bye, Crispin! Bye, Jack! Thanks for all the adventures. ♥️ Thank you, @jeriwestersonauthor, for this amazing series. Can't wait to see what's next!