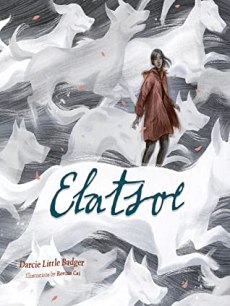 I read it as a(n): audiobook, then switched to a physical book

Elatsoe “Ellie” is a Lipan Apache who is able to raise the ghosts of dead animals. She comes from a long line of family members with this talent, back to her great-great-great-great-great-great grandmother, who her family calls Six Great, also Ellie’s namesake. Ellie’s constant companion is the ghost of her dog, Kirby. When Kirby freaks out, Ellie soon learns that her cousin Trevor was killed in a car accident, but it was a cover-up to his murder. When Trevor’s ghost visits Ellie and asks her to help take care of his wife and baby son, Ellie and her best friend Jay try to figure out what really happened to Trevor, and how a white man called Abe Allerton from Willowbee, TX is involved. Dark, ancient secrets then threaten to consume Ellie and all her family as she digs deeper to uncover the truth about Trevor’s death.

There was a lot to like about this book. For one thing, I think it’s good that Ellie identifies as asexual and not one person in her circle gives a toss or makes a big deal out of it. It is just pure acceptance and it is part of who she is, no questions asked and no one trying to tell her she’ll change her mind once she’s older.

There was also a lot of tradition and stories from Ellie’s Apache heritage. I know absolutely nothing about this, so I’m just going to assume that it is at least partially true, considering that Darcie Little Badger is Apache herself. The elders, the way they are so highly respected, and the various stories are all awesome.

Related to Ellie’s knowledge of her Native culture is her experience with racism. That is not a pro – for those sitting in the back, racism is bad! – but the discussions that came with her experiences are important and necessary. I liked that Jay was shown as a generally real, clueless white dude who has never had to experience racism of any kind. He means well and doesn’t have a mean or racist bone in his body, but he is utterly unaware of why he would have to convince a store clerk to sell him anything because “we haven’t done anything wrong.” Ellie’s response to him is somewhat amused eye rolling, which in real life doesn’t help much of anything, but in the story, it gets the discussion onto the page for readers to ponder over.

Also, how can a story involving the ghosts of fossilized animals not be cool on at least some levels? Ellie brings back the ghost of a trilobite, for fuck sake! And there’s a wooly mammoth ghost! That is rad!

There was a lot, though, that I definitely did not like, and I mostly feel that it outweighed the good things that I did like. For one thing, this book was marketed as a YA. However, it read as way, way younger than that. Middle grade would have been far more accurate. I often had to remind myself that Ellie and Jay were both 17 and nearly through with high school. For example, when the ball at Allerton’s mansion was in swing and vampires were killing, Jay’s older sister wanted to keep Ellie from seeing. She responded that she and Jay were at least at a PG-13. Um, yes. Considering that you are actually 17, it would make sense that a PG-13 scene would be something ok for them to see. I mean, what?

Also, Ellie and Jay are described as being best friends from birth, having met when their mothers were in the same birthing class. And yet they don’t know some very basic things about each other. Out of the blue, Jay tells Ellie he is a descendant of Oberon and that was a huge surprise to her. You wouldn’t know your best friend is descended from the most famous fairy king ever? Really? And Jay didn’t know “Ellie” is short for Elatsoe. Things like that are little facts about a person you learn when you are first becoming friends, not when you have grown up with someone. At one point, Ellie asked Jay if he had other sisters. The way it was written made it unclear if she was joking in that moment or if she was being serious. Given the lack of knowledge they have about each other, I think the confusion is understandable. Which leads me to the next reason I didn’t like this.

LAME DIALOGUE! OMG so lame. Ellie and Jay would literally be in media res and trying to fend off bad guys – and they engage in witty banter? Which isn’t actually witty? No. Just no. It might have worked if this was something like The Princess Bride or Indiana Jones but here? It just came across as immature. Also, one character made actual use of the phrase “meddling kids.” Like from Scooby-Doo. The dumb witty banter would have been fine in that children’s cartoon as well. But here, it kind of just smacked of the author needing to work on aging up her dialogue a lot more.

And finally, the audio book. I had started this as an audio book. The narrator was so awful that, if I hadn’t been reading this for book club, I would not have bothered to continue. Since it WAS for my book club, I got a hard copy from the library and read that instead. It was better and far more interesting to eyeball read it. I would not listen to another book read by the same narrator. She made what was already a mediocre book for me almost unbearably boring.

So ultimately, this was a solid meh for me. I didn’t hate it, I think it had some good things in it, but I definitely did not love it.

All that said, I did find Little Badger’s short story “Nkásht íí” online. I thought it was pretty good.

The Second Blind Son by Amy Harmon is a lovely addition to the Saylock series. Can't wait to read more!
My girl helped me make supper - Korean ground beef - and did the plating all by herself. ♥️
Finally finished an embroidery project. Not my best but good practice at least!
This made me smile so I thought I'd spread the love.