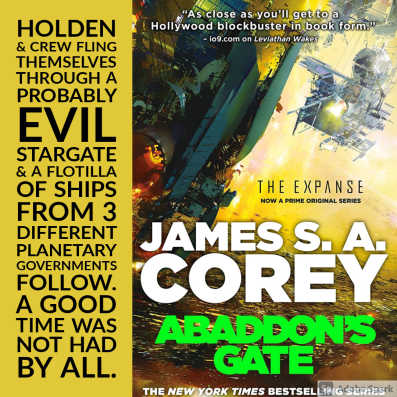 In this third Expanse instalment, Jim Holden and the crew of the Rocinante are freelance contractors now, parted way somewhat acrimoniously with Fred Johnson and the Outer Planetary Alliance. When one of their clients, a rather shady bunch, suddenly back out of their contract with Holden, the crew discover that they are being sued by the Martian government to get the Roci, formerly a Martian Marines battle ship, back. Coming to their rescue is Monica Stuart, a journalist from the UN Public Broadcasting, who contracts Holden on an exclusive if he takes her and her team out to a mysterious ring. The ring was constructed by the protomoluecule creature that launched itself off Venus at the end of the previous book, and it is weird. It appears to be a simple ring construct, and yet ships that go through it do not come out on the other side as expected. It’s like it’s a…stargate…

A flotilla of ships from Earth, Mars, and the OPA is on the way to the ring to investigate, each government hoping to gain the upper hand. When a person from Holden’s past sabotages his reputation, he is forced to flee with his crew and ship through the ring. What they discover on the other side is not at all what they expected.

The thing about book series, for me, is that if they are longer than a trilogy, I tend to lose interest. Usually around book three or four. However, that isn’t close to being the case with this series. Yes, it follows the same core of characters. Yes, it has an overarching plot revolving around a weird protomolecule. But each novel has a large and diverse cast of secondary characters and a new basic plot, each different from the previous book. It isn’t a cliffhanger from one book to the next where you have to keep reading about the exact same goddamn characters over and over. Corey’s style works wonders for me.

Holden is evolving as a character in a good way. He can still be a sanctimonious bastard, but he is self-aware enough now to know it. He is making a concerted effort to be a better person, not only for himself, but for his crew, and especially his lover, Naomi. We know a bit more about Holden’s past than the other main characters, possibly because he is the captain. But we get tidbits of information about Naomi, Amos, and Alex as well. I hope we get to learn more about their past lives as the novels progress. What drove them to be on the Canterbury way back in book one? Why did they end up on a bottom-of-the-barrel ship when they all clearly have crazy skills and can do what they want in much better positions? These things, I want to know.

The secondary cast this go round is Carlos Baca, called Bull, a security officer for the OPA. He is assigned as the security chief to the Behemoth when it heads out to the ring. He’s kind of bitter about his position since he should really have been the captain, and Fred Johnson knows it. But he’s not, because politics! Instead, some jackoff called Ashton is captain, and he seems like a skinny Trump, all ego and narcissism and demands of loyalty. We hate Ashton. But we love Bull.

Joining the Behemoth is Sam, the engineer from Tycho Station and Naomi’s best friend; Clarissa Mao, in disguise as someone called Melba Koh, who is on a private mission of vengeance against Holden for his perceived harm to her family’s good standing; and Pastor Anna, a Russian, well, pastor who is on the Behemoth because she believes God called her there to help in some way. And of course a colorful variety of various others ranging from Martian Marines to news reporters to a neurotic socialite. Each one is there for their own reasons, and each one ends up playing parts they hadn’t anticipated.

Also, Joe Miller is a recurring presence, despite having ridden Eros on its collision course with Venus at the end of book one. So there’s that.

The biblical and religious allusions are inescapable. I mean, it’s built right into the title. Abaddon is the Hebrew word for “place of destruction,” or hell, or the realm of the dead. Pastor Anna has a lot of things to say about the place of religion in human society, about forgiveness, and about the ways in which humans must fit in with the greater universe. It was not a “beat you over the head” sort of religious discussion. It was interesting and in the background. I’m sure others who are more inclined could find a lot more to say about it. I can, too, but find that I can’t be bothered with religion today. Suffice to say, the title is a perfect highlighting of the plot in this one.

Themes of loyalty and bravery are front and center as well, which I’m coming to expect from this series. There are so many ways in which these characters, and those in the previous books, have displayed these concepts. I think one of the most important discussion on bravery in this instalment is when Holden figures out how scared he really is by anything to do with the protomolecule. And yet, he does whatever has to be done, despite his fear. I guess Ned Stark was right – when you’re scared, that’s the only time you can truly be brave.

I have to take a forced break in the series to read a couple books I promised to a friend for a review, and that’s cool, but I can’t wait to get back into this series!