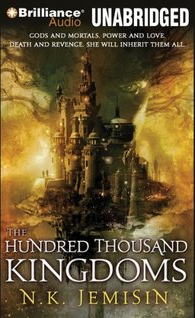 Setting: the city of Sky

Yeine Darr is the daughter of a disgraced noblewoman of the Arameri, the rulers of the Hundred Thousand Kingdoms. Their seat of power is in the city of Sky. Yeine is summoned to Sky by her grandfather, her mother’s father, who is also the ruler of the Arameri. To her utter shock and horror, he names her as one of his three heirs to the throne. Now she will be expected to compete against two cousins she never knew for the throne. While she is learning the ways of Sky, rife with political machinations and corruption, Yeine also learns that several gods are held by the Arameri as slaves after they lost to the god Bright Itempas in the Gods’ War. Now those gods are bitter, unsurprisingly, and they have a plan to help Yeine win in her struggle for the throne.

This first instalment in Jemisin’s The Inheritance Trilogy is, in many ways, a pretty typical fantasy narrative: a young warrior woman loses her family, is named an heir to the kingdom, falls in love with a god, is used as a pawn by a variety of people, and eventually is victorious. But Jemisin sort of upends a lot of traditions as well, which was her stated goal in writing her novels.

The people who were the ruling class, the Arameri, were the highest class because the high priestess of the goddess Itempas was an Arameri when the Gods’ War occurred millennia ago. So that part makes sense within this story. I really like how Jemisin then creates a society that is more and more corrupt the closer one gets to the gods. I don’t think it is untrue at all here, but it is certainly not what most people want to believe. This story tackles it head-on.

The world building in this novel is amazing. That is one of the best things about Jemisin’s writing. I did find it a little hard to keep track of at times, which might be partly because I listened to the audiobook rather than eyeball reading this one. Sometimes the dialogue was not well marked that I could tell, so I wasn’t sure who was speaking for kind of big sections of discussion. But I’m not sure, again, how much that is a function of listening to the book instead of reading it.

In line with the rich world building are many, MANY different themes. Off the top of my head, there is slavery, colonialism, racism, power, tradition, and religion. These are intricately woven throughout the entire narrative in ways that are sometimes startling or subversive. It’s a great way to get readers to think about many things we believe and hold dear without really knowing WHY we do. So many traditions in this novel were followed simply because that’s what has always been done, which is of course why something is a tradition. But if a tradition blows, then you should change it or abandon it. Columbus Day, for example, isn’t a traditional holiday we should still be observing in the 21st century. It is being replaced in many states by Indigenous Peoples Day, which is far better. Change can be a good thing.

Every single character in this book is richly nuanced and complex with the exception, I think, of Scimena Arameri, Yeine’s cousin and another potential heir. She was all hate and bitterness, all the time. I’m not too sure why this one character was so one-dimensional but I’m sure Jemisin has her reasons. I may have just not picked up on what it was. She was an easy character to despise, though. Otherwise, the rest of the cast was really interesting, even those who you don’t like.

Looking forward to getting into the second book!