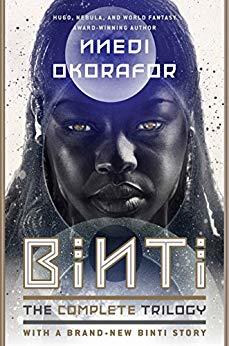 Binti is a young woman from Earth, a member of the Himba people of Namibia. She is what is known as a master harmonizer, a person who has a skill in bringing balance to all, usually through math. Her role is to succeed her father as her tribe’s master harmonizer. However, that is upended when Binti is accepted into the prestigious Oomza Uni, an entire planet devoted to learning. Binit runs away against her parents’ wishes to study, but while her ship is en route, it is attacked by the warlike Meduse, leaving her the traumatized only survivor. Binti eventually forms a bond with Okwu, one of the Medusae from the attack, and a link is created between their two peoples, paving the way for an unusual peace.

I read these novellas in the form of an omnibus paperback, so I can’t really separate the three stories in my mind. To me, they’re all one story. But, as always, I am impressed with Okorafor’s skill in creating such rich characters and culture in a relatively short span of pages. The Himba people are not fictional; they have a long and complex culture from which Okorafor could draw. But she fleshed out the people in ways that made them entirely real. I cared about every character on the page, which is a rare thing for me.

I loved Binti’s search for herself, her bravery in leaving the only home she’d ever known in an attempt to create a different life for herself. The act of leaving home, becoming independent, learning new things about yourself is one of the best gifts we can give ourselves. I feel bad for people who never experience that in any way.

The ways that humans and the Medusae were at conflict and how they resolved their problems is sadly still a relevant metaphor for human society as a whole. We seem plagued with people, whether groups or individuals, who only care about enriching themselves or enforcing their agenda and worldview. There isn’t enough peace anywhere. So much can be said about this but, as I’ve said for years, SFF is an ideal medium in which to discuss real-world issues. Binti is no different. There were many themes that made me think: home, community, identity, conflict, colonialism, friendship. I’m sure examinations of these themes and more could be made, and wind up longer than the book itself. I love that; books that make me think while also providing a good story are to be treasured.

Overall, I liked this story, though I think I enjoyed Okorafor’s other works that I’ve read a little more. This trilogy (plus the short story included in the omnibus edition) seemed to focus more on how to fit in social issues than how it impacts the plot, so I think there are some gaps that need to be filled. But still, the Binti trilogy is a terrific story and one I definitely recommend.