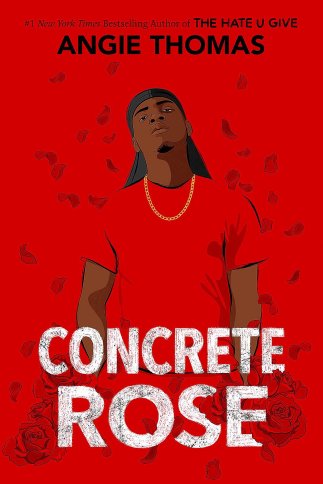 Concrete Rose is the sequel story to Thomas’s The Hate U Give. This tells the story of Maverick Carter when he was a teenager struggling to find his place in the world. Maverick always expected that he would grow up to be in a gang like his dad. His future as a gang member seemed cemented when he learns that the baby of one of his classmates is also his. Selling drugs seems to him to be the only way to make enough money to make ends meet, support his son, and help his mother with their bills. When his girlfriend Lisa also becomes pregnant, Maverick understandably freaks out. He assumes he will never amount to anything and so why NOT join a gang and sell drugs? His part time job working for Mr Wyatt’s store has shown him that “honest work” doesn’t pay anything. When Maverick suffers a catastrophic loss, he finds that life takes you in directions you never expected and that the help we might need is right there with us if we can open our eyes enough to see it.

So, I loved this book. I have loved all of Angie Thomas’s books so far, which is a record not even Neil Gaiman holds with me. This is a sequel to THUG but you don’t have to have read that one to get this one. I love how she weaves in bits of her other novels throughout the narrative. For example, when Lisa’s mom kicks her out of the house, she goes to stay with Miss Rosalie and takes her friend Brenda’s bedroom. When Brenda comes to visit with her new baby, they all get a kick out of meeting baby Khalil. That hit me right in the feels when I realized it is Khalil from THUG. Little tidbits like that really bring the story to life and serve as sort of an insider’s view for those of us who have read the other books, but it isn’t necessary to get the story. It is fully standalone.

The power of names is a strong theme throughout the story as well. Maverick names his son Seven because it is the number of perfection, and to him, his son is perfect. Maverick says his father named him so because he wanted him to be a freethinker and independent. The course of the narrative leads Maverick all over but he does eventually live up to his name, though not at all in the way he expects.

I how Mr Wyatt was a father figure to Maverick, teaching him some transferable skills and encouraging him with tough love. Mr Wyatt talks a lot about his garden, especially his roses, which are stronger than they seem and can grow anywhere, even through concrete. I assume the title, and the theme of hidden strength, is inspired by the poem “The Rose That Grew from Concrete” by Tupac. Maverick has that strength and his life could easily have been ceaseless heartbreak and danger. But he chooses to do what he thinks is best for his family, and his losses to date have shown him what he DOESN’T want for them or for himself. He is brave enough to try something that is out of his realm of experience, and like the rose, he learns that he can bloom. “Long live the rose that grew from concrete when no one else ever cared.”

I could really go on about this book all day but I will just stop before I actually do so. If you haven’t read any of Angie Thomas’s books, you are really missing out. This would be a good place to start, but honestly I think you should read THUG first. This one will have more of an emotional impact if you know Starr’s story already.

I loved this book so much! I loved Rocky especially. He is a good good good character! IYKYK
An interesting but flawed book. I liked it overall but I didn't like a lot of separate things within it. A longer and much more articulate review is on my blog.
I might have cut my hair
This is what an actual pro life book reads like. If I were to say I'm pro life, it would look similar to this. This author is trying to prevent abortions by - holy shit - being logical and suggesting ideas that actually work.